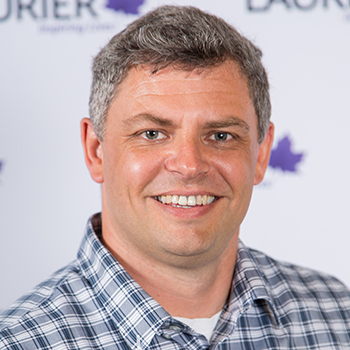 Ken Jackson, an associate professor in Laurier’s Lazaridis School of Business and Economics known for his engaging, supportive and flexible teaching style, is being recognized with a 2022 Teaching Excellence Award from the Ontario Undergraduate Student Alliance (OUSA).

Jackson teaches economics at the undergraduate and graduate levels, from small seminars to classes of hundreds of students, on topics including macroeconomics, the economics of poverty and sports economics.

OUSA, which represents more than 150,000 professional and undergraduate students in Ontario, presents the awards annually to one faculty member from each of its eight member associations, including the Wilfrid Laurier University Students’ Union. Teaching Excellence Awards recognize educators who excel at sparking curiosity, engaging students and helping them build critical thinking and learning skills. Jackson was chosen by Laurier Students’ Union leaders based on nominations submitted by Laurier students.

“I am honoured to be selected by the students for this award,” says Jackson. “Over the past two years, my focus has been on developing new approaches to engage students that allow them to develop knowledge and then demonstrate their creativity and capacity to solve problems. Throughout this process I have appreciated the constructive feedback I receive from students about what is working, and what isn't, and their patience as we figure that out together.”

Jackson has built a reputation among students for his fun and interesting lectures, as well as his compassion, patience and willingness to go above and beyond for students.

“He’s probably the most engaging professor I’ve ever had,” says Neeraj Varma, a fourth-year Business Administration student. “He’s warm and personable and genuinely cares about his students’ success and their learning, not just their grades. He always asks if students have questions and checks in to make sure everyone understands.”

Students also thrive in Jackson’s courses because he finds unique ways to explain difficult-to-understand concepts, sometimes through metaphors and analogies. For instance, in his popular third-year course Sports Economics – which Jackson developed and has taught since 2020 – he uses sports analogies to help students understand concepts such as game theory.

“Economics is pretty tough sometimes, but Ken Jackson is really good at articulating complex concepts,” says Daniel Austin, a fourth-year Economics student. “In the class Economics of Poverty, we studied how to measure poverty. There are many ways to measure poverty and they’re all a bit confusing and mathematical, but Ken Jackson did a really good job of explaining them in a way that made sense.”

During the pandemic, Jackson went out of his way to support students by making his teaching, assignments, exams and office hours as accessible as possible.

In his third-year Economics of Poverty course, for instance, Jackson taught in-person and via Zoom simultaneously and later posted recordings of the lectures on MyLearningSpace, Laurier's learning management system.

Jackson offered his office hours online and, later in the pandemic, outside at a table in front of the Library on the Waterloo campus so students felt safer meeting him in person.

He also provided students flexibility around assessments. To reduce students’ anxiety around exams, Jackson gave students in his third-year Sports Economics course the option to submit a final project instead.

“I’ve never been given an option like that in a course,” says Varma. “It’s more work for him, grading an exam and a project, but it’s a huge benefit to students. It shows that he understands the anxiety some students feel when writing exams and that learning doesn’t need to be one size fits all.”

Previous Laurier winners of the OUSA Teaching Excellence Award include Wing Hong Chan (2021), Ehaab D. Abdou (2020) and Deanna Yerichuk (2019). Read more about Laurier faculty members who have been recognized for their teaching excellence.