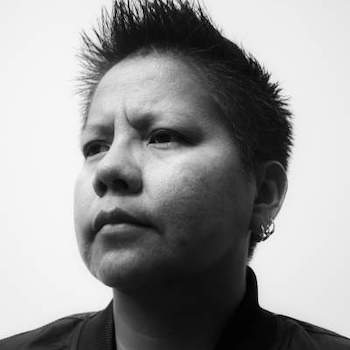 In that time, Lezard has continued to work to raise awareness of the often-overlooked experiences of Two-Spirit/Indigiqueer LGBTQ+ people and advocate for action to end violence directed at them. The report calls for better access to housing, health and social services, and the introduction of culturally appropriate, trauma-informed counselling for victims.

In March, in direct response to the calls to action in Lezard’s report, the federal government announced a new $724-million program in partnership with Canada Mortgage Housing Corporation (CMHC) and Indigenous Services Canada to construct a minimum of 38 shelters and 50 transitional homes across the country to shelter Indigenous women, children and 2SLGBTQQIA+ people fleeing gender-based violence.

“It has been a good feeling to know this report has had impact,” said Lezard, who is Outma Sqilx’w and a member of the Penticton Indian Band in the Okanagan, B.C.

“In our report, we reflected a lot on the social determinants of health and called out housing specifically,” says Lezard. “Lack of access to housing can significantly impact the health and safety of people, and 2SLGBTQQIA+ youth in particular, who are at greater risk of houselessness than the general population.”

Throughout the report, Lezard and colleagues interviewed 2SLGBTQQIA+ people across Canada to capture their lived experiences. Lezard who is a Two-Spirit, non-binary person, says all of the authors of the report also had lived experience.

Lezard spent more than 35+ years in the field as a social worker, HIV/AIDS trainer and crisis counsellor, and their parents and grandparents were taken into the Residential School system. For years, they have worked to draw attention to the experiences of Two-Spirit and gender-fluid Indigenous people, which have largely been left out of conversations on queer rights and conversations on truth and reconciliation.

2SLGBTQQIA+ people account for about 10 per cent of the general population; however, anecdotally, Lezard estimates the number could be closer to 20 per cent in Indigenous communities.

Despite this, in the Truth and Reconciliation Commission’s 4,000-page final report, only one page is dedicated to Two-Spirit or Indigiqueer people and there is no mention of this community in the 94 calls to action.

“This is an entire history and collection of experiences that has not been told,” says Lezard.

Lezard’s work in educating people about these experiences has garnered international attention as other nations embark on their own reconciliation journeys. Lezard is a member of the Centre for Global Indigenous Futures at Macquarie University in Australia, and in January 2023, they will travel to Australia to meet with other scholars and provide expertise to help inform policy in Australia as the nation looks to Canada for guidance on its own inquiry into missing and murdered Indigenous women and 2SLGBTQQIA+.

“Our report was written in a way that staff at a health centre or criminal justice centre could easily read it. It is a way for people who come in contact with this community to be more culturally aware and informed,” says Lezard.

“This is a starting point, but it’s not the endpoint in this journey.”