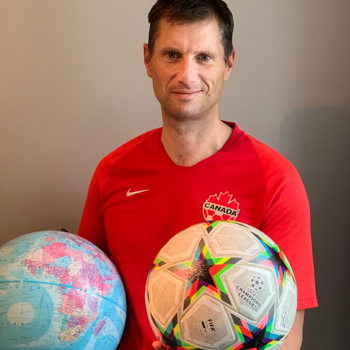 In the days ahead of Canada playing Croatia at the World Cup, Canada coach John Herdman’s strong, antagonistic language helped set the stage for a highly anticipated showdown.

The two nations share a “complicated history,” according to a World Cup news hub led by Tim Elcombe, an associate professor of Kinesiology and Physical Education at Wilfrid Laurier University and fellow at the Balsillie School of International Affairs (BSIA): an estimated 80,000 Croatians immigrated to Canada during the 20th century, which created friendly ties between the two countries. However, in 1993, Canada’s UN peacekeepers faced off with Croatian forces during the Battle of Medak Pocket, reads some of the hub’s political insight.

When the final whistle was blown in the match, Croatia soundly beat Canada 4-1 to eliminate the Canadians from the World Cup — a result that makes sense after a glance at the site’s FIFA World Cup rankings. Croatia is ranked 11th in the tournament; Canada was 27th.

This international relations context is provided for every World Cup matchup in individual briefings as part of the BSIA’s “World Cup and Global Politics Project.” The web hub also includes scores, a World Cup schedule, a 20-page tournament primer, and tables and indices comparing nations’ scores for happiness, human freedom, GDP and FIFA World Cup rankings, among others.

“There’s been a lot of knowledge mobilization for this one-stop hub,” says Elcombe. Supported by Alanna Harman, an assistant professor with Laurier’s Kinesiology and Physical Education department, Elcombe and Harman lead a team of Balsillie students creating content on a daily basis. The team run the World Cup project in collaboration with Cardiff Metropolitan University in Wales, another nation competing in the 2022 World Cup. Elcombe went to the U.K. institution on sabbatical in 2015 where he developed a passion and new perspective on international sports.

“It led to a big interest in the intersection of ethics, sports and political affairs — socio-political context and how that makes things really complicated and messy,” says Elcombe. “This project is a resource for the media, scholars, policymakers or even just interested individuals.”

Another example of a briefing for an intriguing international relations matchup involved Brazil against Switzerland: “Despite being 9,000 km away from their homeland, Brazilians on opposite ends of the political spectrum clashed last month at a polling station in Geneva; several Swiss companies are based in Brazil. Brazil is Switzerland’s most significant trade partner in Latin America and the nations have a long history of relations. Switzerland opened a consulate in Rio de Janeiro in 1819.”

Brazil edged Switzerland in the game by a score of 1-0.

Or Belgium against Morocco: “Loyalties at home in the European nation may be tested amongst the nearly half a million Belgians of Moroccan descent. Tensions amongst Belgians of Moroccan descent escalated in 2017 after Morocco qualified for the 2018 World Cup in Russia. Following the North African nation’s defeat of Ivory Coast, hundreds of Moroccan supporters gathered in the centre of Brussels, with celebrations turning violent. Despite the domestic tensions, diplomatic relations between the two nations are strong. In February, Belgium authorities and Moroccan community leaders recognized the role of Moroccan migrant workers in the development of the Belgian economy after World War II.”

Morocco shocked No. 2 Belgium in the match, winning 2-0. Riots broke out in Brussels following the match.

As the World Cup tournament nears completion, the Balsilie team will also be doing some reflective activities to develop a legacy document — and it won’t focus on goal celebrations.

“Lots of people are talking about politics in the World Cup,” says Elcombe. “On the football side of it, there will be talks about Qatar and sports washing. We’ve had a string of these events in countries with questionable international reputations — Russia hosted the World Cup in 2018, China hosted the Beijing Olympics this year and now there’s Qatar’s World Cup. It’s become easier for authoritarian regimes to host these mega-events because fewer democratic countries want to.”

The 20-page tournament primer includes links to many developments on the road to Qatar — including an investigative piece by U.K. newspaper The Guardian, which reported in February 2021 that more than 6,500 migrant workers had died in Qatar since the awarding of the World Cup.

“When FIFA says, ‘No politics at the World Cup,’ well, that’s pretty hard to do,” says Elcombe.

“Some people didn’t want to support this event because of its many controversies. Others feel like they had no say in where the tournament was hosted. What does every individual do? That’s the complexity of sport. It’s riddled with tensions — there are so many interesting intersections of sports and international affairs.”

Elcombe says the World Cup is sure to draw a lot of attention across the country with Canada involved and Qatar being a controversial host. He plans to be talking about and exploring these ideas again in four years, when Canada is co-host of the World Cup along with the U.S. and Mexico. He says that, ultimately, this year’s World Cup news hub serves as a pilot project for 2026.

“It’s exploring what kinds of things we can look at, what we can provide to disseminate information from the World Cup,” says Elcombe. “I’d like to use the information from this year’s web hub — who was interested and who wasn’t, as well as review how we successfully got people to access the resources. And in the process of it, we get to build a legacy document.”

The World Cup final will take place on Dec. 18. Canada co-hosts the next World Cup in June and July of 2026.