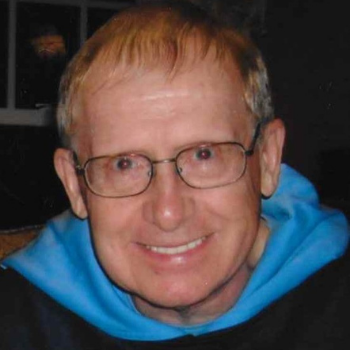 Wilfrid Laurier University is saddened by the passing of Peter Dembski, a former instructor in the Department of History at the Waterloo campus. Peter passed away March 7 at the age of 82.

Peter is remembered as a dedicated and well-liked instructor. He taught Canadian history at several universities, including Laurier, where he enjoyed cheering on the Golden Hawks basketball teams. Peter was an avid activist involved with many causes during his life, including the anti-nuclear arms movement and poverty rights. He was a proud member of the Alliance Against Poverty in Kitchener-Waterloo.

Peter’s scholarly articles have appeared in journals including Ontario History and the Dictionary of Canadian Biography. In 2017, Wilfrid Laurier University Press published his book Travels and Identities: Elizabeth and Adam Shortt in Europe, 1911, which chronicles the couple’s travel experience in Europe during a period of rising political upheaval prior to the First World War.

He is survived by his wife Julie, their son Chad, and well-remembered by family members, friends and colleagues. An online memorial for Peter will be held on Sunday, March 21 at 1 p.m. For more details, please visit Erb & Good Family Funeral Home online.