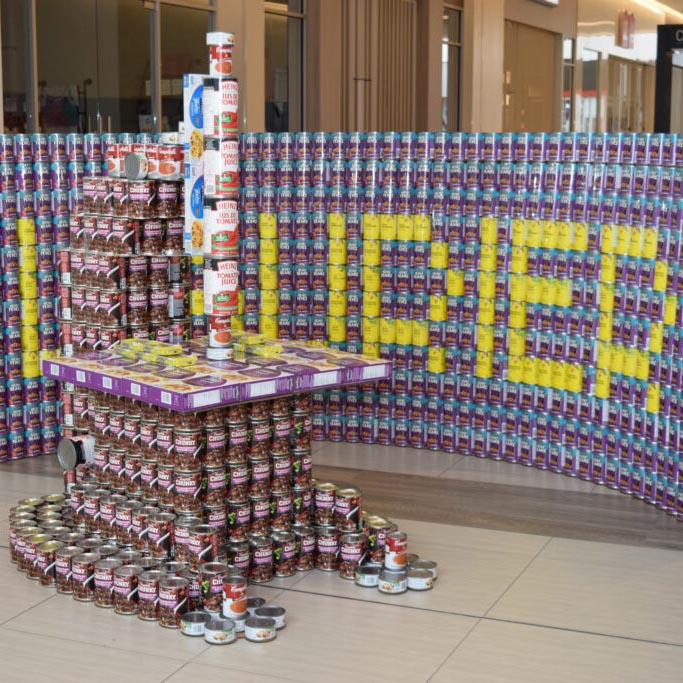 Wilfrid Laurier University’s Faculty of Science is helping raise money for the Food Bank of Waterloo Region as part of the Canstruction fundraiser again this year but, for the first time, the annual campaign has gone virtual.

In past years, faculty, staff and students came together in Waterloo’s Conestoga Mall to build an oversized structure out of non-perishable food items in support of the Food Bank of Waterloo Region. Laurier’s team competed against others for the People’s Choice award, presented to the Canstruction display that raised the most money.

Because COVID-19 restrictions are preventing teams from working in-person on structures, the Food Bank of Waterloo Region has launched Battle of the Builds, a look back at five years of Canstruction installations. Rather than donating to a particular display, visitors to the food bank’s website can look through photos of past builds and pick their favourite team to donate to.

Staff, faculty, students and community members can support Laurier’s team by donating online until April 25. The team that raises the most money for the food bank will be named Battle of the Builds champion.

Some of Laurier’s past structures include a giant fume hood, a giant microscope and river sampling diorama. The structures were designed and built by Ruth MacNeil, senior administrative officer in the Faculty of Science, Ron Daniels, program coordinator for the Science Maker Lab, and Bruce McKay, associate professor in the Department of Psychology, with help from students.

The Canstruction campaign has provided more than 1.2 million meals to the local community since 2008. The Food Bank of Waterloo Region says that every dollar donated provides three meals for community members in need.