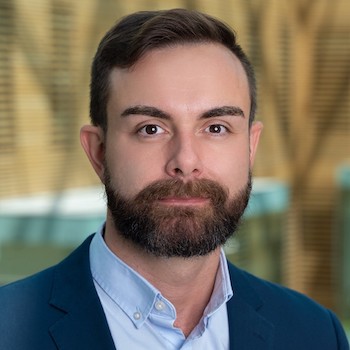 Travel is an important part of the research process, enabling researchers to seek feedback and new perspectives on their work from colleagues at other institutions. As COVID-19 prevents scholars from visiting each other for the foreseeable future, some, like Andriy Shkilko, are creating online communities to continue their critical discourse.

Together with colleagues from universities in Hamilton, Toronto, Oregon and Stockholm, Shkilko, associate professor of Finance at Laurier’s Lazaridis School of Business and Economics, has created a successful online seminar series called The Microstructure Exchange. In its first month, the weekly series about financial market microstructure research attracted 610 subscribers.

“I didn’t even know there were 610 other people on the planet who want to discuss the extreme details of market structure,” jokes Shkilko. “We started by inviting friends and peers, and eventually asked them to spread the word through their networks. Then it just kind of exploded.”

Each week, one scholar is invited to share a new study on Zoom and seek input from participants. All presenters are experts in market microstructure, the study of financial markets and how they operate. The enthusiastic response has validated what Shkilko and his co-organizers suspected when they conceptualized the series in March.

“After the universities closed and our initial shock wore off, my colleagues and I said to each other, ‘If we can teach online, why not do research online as well?’” says Shkilko. “Everyone is in the same boat – our mechanism for feedback has been cut off. And feedback from other experts is essential. You think you have something figured out and then someone at a seminar will ask a question or share a new perspective that can make you rethink your conclusions.”

The Microstructure Exchange has presenters scheduled through the end of June, at which time the organizers plan to invite submissions.

“To get the ball rolling, we have been inviting senior researchers who we knew would draw a crowd,” says Shkilko. “But starting in July, we want to open it up to emerging scholars who need feedback the most.”

"The Microstructure Exchange opens up the field, democratizing research to a level we’ve never seen before. I hope this will be a permanent venture.”

Shkilko, the Canada Research Chair in Financial Markets, has an active research program examining issues such as market regulation and insider trading. He is excited that a virtual community born out of difficult circumstances may actually prove to be a long-term asset.

“What we’ve heard from participants is that this series should keep going,” says Shkilko. “Folks usually travel to one university at a time to share their research. The Microstructure Exchange opens up the field, democratizing research to a level we’ve never seen before. I hope this will be a permanent venture.”

Even still, Shkilko sees his new Zoom community as a “supplement rather than a replacement” for traditional in-person meetings. He is eager to once again share and debate with his peers face to face.

“You really can’t replace the energy of being in the same room and writing on the same whiteboard or piece of paper,” says Shkilko. “It’s more important than people realize."