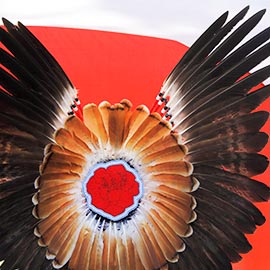 Jennifer Mt. Pleasant, a member of the Tuscarora Nation, knew that attending Laurier’s Brantford campus would allow her to explore her interest in criminology and make new connections while living at her childhood home on the Six Nations of the Grand River Territory.

What she didn’t know was how profoundly her education – and life – would change because of it.

It was during a third-year undergraduate course that Mt. Pleasant first learned of Canada’s troubling cases of missing and murdered Indigenous women (MMIW).

“The issue of Indigenous girls being trafficked for sex was discussed in one of my courses,” said Mt. Pleasant. “That was the first time I had been exposed to the topic of violence against Indigenous women.”

Instantly engaged with the issue, Mt. Pleasant incorporated MMIW content into her studies at every opportunity, approaching it from new angles to broaden her own knowledge.

“There is nothing really out there that advocates for Indigenous men,” said Mt. Pleasant. “This leads people to believe that Indigenous men aren’t worthy of inquiry.”

In the year following her graduation from Laurier, Mt. Pleasant continued her personal research into the cases of missing and murdered Indigenous men and launched a database to house her findings. Compelled to continue her research through an academic lens, she chose the topic of Canada’s MMIM crisis as the major research project for her Master of Arts program in Social Justice and Community Engagement (SJCE) that she began at Laurier in 2014.

Through research conducted for the database, Mt. Pleasant examines the plight of Indigenous men, while exploring several deeply rooted misconceptions such as male gang involvement, substance abuse, and men as the perpetrators of violence but not as victims. She hopes to broaden social perspectives of all people by highlighting the connection between historical and continued colonial violence and current social issues within Indigenous communities.

“I want people, especially my own people, to know the extent to which violence plays in our everyday lives,” she said. “Violence against Indigenous men is a serious issue, with statistics showing that they are three times more likely to be murdered than Indigenous women.”

Kim Anderson, an associate professor in the SJCE program at Laurier’s Brantford campus and the principal investigator for the Bidwewidam Indigenous Masculinities (BIM) project was Mt. Pleasant’s project supervisor.

“Having Professor Anderson share her knowledge with me on my project was a huge asset,” said Mt. Pleasant. “I am very honoured to have worked with her.”

Mt. Pleasant admits her research has been met with mixed emotions from within the Indigenous community. She’s been told her research isn’t a priority and has been denied funding opportunities.

“I’ve taken a lot of hits over the past couple of years but I just use it as a reason to keep going,” she said.

With funding support from Laurier’s Office of Aboriginal Initiatives, Mt. Pleasant travelled to Ottawa in February 2015 to attend the National Roundtable for Missing and Murdered Indigenous Women, where she heard from the families of some of the women. She presented her research on missing and murdered Indigenous men at the roundtable and shared her findings with the Laurier community during Aboriginal Awareness Week 2015.

Mt. Pleasant successfully completed her master’s in January 2016, and may pursue a doctorate degree.

Her database currently holds the names of approximately 800 murdered and missing Indigenous men and boys. But with the current statistics on MMIW nearing 4,000 names and the frequency thought to be three times higher for men, Mt. Pleasant estimates the number of missing and murdered Indigenous men to be closer to 12,000.

Until her future education plans are confirmed, Mt. Pleasant continues to add more names of missing and murdered Indigenous men and boys to her database as families reach out to her with stories of their loved ones.