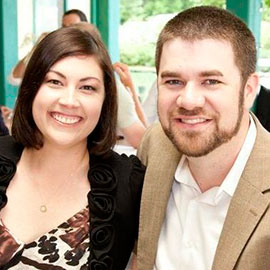 Must love classic rock, Ethel’s tacos and history – these sound like features you might find in an online dating profile.

But Lianne Leddy, assistant professor of Indigenous Studies at Laurier’s Brantford campus, and Mark Humphries, director of Laurier’s Centre for Military Strategic and Disarmament Studies and Dunkley Chair in War and the Canadian Experience, didn’t require an online dating website to make a connection.

All they needed was Laurier.

Both hailing from small towns in northern Ontario, Leddy and Humphries each sought a university that offered a strong feeling of community coupled with an excellent academic reputation. A friend of the Humphries family recommended Laurier’s history program to the would-be history major, while Leddy chose to attend Laurier because of its reputation as a well-respected school.

Eager to become immersed in all aspects of university life, Leddy and Humphries both found themselves involved in activities at Laurier when they arrived on the Waterloo campus. Humphries wrote for the student newspaper, The Cord, in addition to helping with jam nights at Wilf’s, the campus pub. Leddy worked at the library and was involved with the university’s women’s centre.

Finding love and getting married was the last thing on either of their minds.

In the fall of 2003, a classmate of Humphries and library colleague of Leddy’s introduced the pair in professor Michael Sibalis’ third-year history course.

“It was a hardly a romantic setting,” recalls Leddy.

Romantic setting or not, the two history buffs found common ground and became friends. However, by the spring of 2004, the classmates knew they had found more than just friendship.

Their first date unfolded in a classic rock-meets-Uptown Waterloo kind of way. Leddy and Humphries took in Neil Young’s film Greendale at the Princess Cinema, followed by tacos at the ever-famous Ethel’s Lounge.

Humphries decided to pursue his Master of Arts degree at Laurier in the fall of 2004 and Leddy had her fourth year of her undergraduate degree to complete. The couple, happily committed to each other by this point, embarked on the next phase of their relationship. They call this the “log cabin stage.”

“If you can live with someone in only 250 square feet, you know you’re going to be okay,” said Humphries.

Surviving the log cabin stage, the pragmatic duo felt that getting married was the next logical step. They skipped over the complicated art of proposing and headed straight for the jewellers. An engagement ring and tickets to see The Who and Tom Petty and the Heartbreakers cemented their relationship by Thanksgiving of 2004.

The couple was in the midst of their graduate studies when they married in Leddy’s hometown of Elliot Lake in May, 2006. Several Laurier friends and alumni topped the guest list.

The newlyweds had to take a practical approach to their honeymoon. They had been selected to participate in professor Terry Copp’s battlefield tours of Normandy, France – an opportunity they couldn’t pass up. After spending two weeks learning about Canada’s contributions in World War II, the couple put their studies aside for some well-deserved downtime in Paris.

Although their studies and early career opportunities have taken them across the country, Leddy and Humphries have come full circle, returning to Waterloo and Laurier in 2014.

“Ten years ago, we never dreamed we would be back at Laurier, in a city we know so well, near so many of the friends we made during our undergraduate years, and now doing jobs we love,” said Leddy. “Laurier was at the centre of that for us.”

Leddy and Humphries will celebrate their 10th wedding anniversary this May. When asked about the secret to their marital success, the couple cite good communication skills and a sense of humour as key factors.

The rest, as they say, is history.