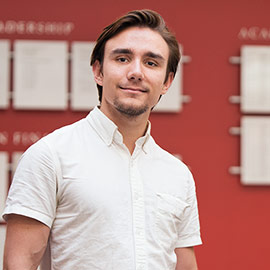 The Laurier Centre for Economic Research and Policy Analysis (LCERPA) has awarded Laurier Business and Economics student Dylan Clarke the 2015/16 Peter Sinclair Undergraduate Research Prize for his work on credit constraints and exporting within in Vietnam.

Eight nominees presented their research at a symposium hosted by Laurier’s Department of Economics. This is the second year LCERPA has run the symposium, which was established to recognize demonstrated excellence in research ability among Laurier's undergraduate students.

“The opportunity to work on a research paper with Dr. McCaig, followed by receiving the Peter Sinclair award, has been the pinnacle of my undergrad,” said Clarke. “Participating in the conference allowed us to present our research to one another and learn about the fascinating topics being explored by economics undergrads at Laurier. I only see competition for the award growing in the future.”

LCERPA offers Laurier's undergraduate economics students opportunities to develop and promote their research skills. This is the first year that LCERPA has awarded the Peter Sinclair Undergraduate Research Prize, announced in 2016 in honour of the late Peter Sinclair, an associate professor of Economics who passed away in 2015. The runner up, Steven Whitlow, was commended for his research on the effect of immigration on wages in the United Kingdom.

“Dr. McCaig really taught us that the evidence on international trade tells a mixed story — trade creates winners and losers, and sometimes the gains are not that large.”

“At the Lazaridis School, economics students develop the analytical and quantitative skills essential to understanding the world around us,” says Tammy Schirle, associate economics professor and director of LCERPA. “Our faculty members take pride in the outstanding research conducted by our students. Nominating our best students for this prize offers us an opportunity to showcase their achievements.”

Clarke, who worked under the supervision of Associate Economics Professor Brian McCaig as part of a fourth year advanced special topics in economics course, looks at how poor institutional frameworks, in particular weak credit institutions within Vietnam, may prevent the most productive firms from entering the export market, creating inefficient allocation of resources in response to trade liberalization.

“I was extremely impressed with Dylan’s drive,” says McCaig. “He took a topic that was relatively new to him and very quickly became a real expert. He has a bright academic future ahead of him.”

Clarke graduated from Laurier’s Business Administration program in Spring 2016. His research examines whether privately owned firms are denied export opportunities during periods of liberalization due to the misallocation of credit in favour of highly inefficient state-owned enterprises, rather than allocating credit toward ostensibly more productive private firms.

“At its core, the research paper provides an empirical analysis on the ability of credit market failures to spoil the gains from trade,” says Clarke. “Dr. McCaig really taught us that the evidence on international trade tells a mixed story — trade creates winners and losers, and sometimes the gains are not that large. That’s not how it’s portrayed in more introductory-level trade courses.”

This fall, Clarke will attend the University of Toronto as a master’s student in economics. Together, he and McCaig are working to finalize the research paper on Vietnam for submission to an academic journal. The paper will also be presented this September at the Rimini Conference in Economics and Finance.