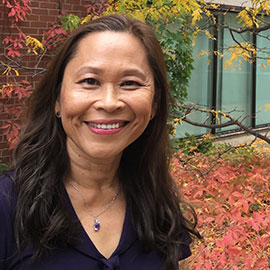 There’s not a lot of love for romance novels in the academic world.

The paperback books are known to fill the racks at gas stations and pharmacies, notorious for their covers of burley men and women in distress. They are sold as a disposable “impulse” purchase.

The books have a reputation for being “mindless fodder” built around clichés and problematic representations of sexuality and gender.

Laurier English and Film Studies Professor Eleanor Ty doesn’t see it that way. She believes romance novels provide a historical insight into the lives of women and a platform to explore sex and sexuality in private.

“Because romance novels are so popular, we need to ask, ‘What are women getting out of them?’” says Ty. “It seems to be that they are filling a niche for women; it’s a fantasy world that is about sexual life, but most importantly it’s a world where feelings and emotions take precedence.”

Romance novels are a private outlet for readers to get a glimpse into the lives of other people.

“Exploring sexuality can be very limited and not something we can freely talk about,” says Ty. “Because films and literature prescribe how people are supposed to act, often that is our only exposure to these experiences.”

As a researcher of 18th-century romantic novels in particular, Ty challenges the dismissal of the genre as consisting of sentimental stories that are not very important. Not only do romantic novels act as an outlet to explore sexuality, but she says they also express the sentiment of women at the time.

Ty is now applying her literary research to television adaptions of romantic novels.

She has written about the popular television drama Outlander, a story of Claire Randall, a nurse from the 1940s, who is transported back in time to 18th-century Scotland. The television series is based on the novels of the same name written by Diana Gabaldon and is currently in its second season on the Starz network.

Ty’s analysis of the series appears in the book Adoring Outlander: Essays on Fandom, Genre and the Female Audience (McFarland, 2016) and she also hosts a blog, Outlander Idler, which discusses the series.

What fascinates Ty about the series is the juxtaposition between the 18th-century era and a “modern” female heroine.

“The costumes and scenery evoke a period where men were masculine and strong and women were delicate,” says Ty. “However, as a 20th-century woman enters this world, she has this amazing skillset as a nurse that demonstrates an intelligence and cleverness uncommon at that time.”

Ty says that the attraction to the romance genre for women is not that they want to become the heroine, but that it is one of the only forms of media centred upon the female perspective.

“The romance genre is meant to help women take charge of their sexuality,” says Ty. “In society, sex is still a forbidden topic, especially for young people. We don’t know how to be intimate or how to love. If you consider that most young people learn about sex by watching pornography, that is more often from a male perspective, so women have no place to watch what fulfils them.”

The character of Claire in Outlander is a critique of the time period in which it is set, but Claire also represents empowered sexuality as the story follows her through two romantic relationships. “In Outlander you’ll find a lot of the sexual scenes, but they are shot through the woman’s gaze,” says Ty.

“The female authors of 18th-century romantic novels articulated a lot of different issues about women,” says Ty. “My initial work focused on how they used the sentimental novel to express their feelings about not being able to own property, being overlooked intellectually and being commodities for their fathers to marry off without much consent.”

Britain during the 18th century is particularly interesting to Ty because it was the era of Enlightenment.

“There were a lot of rigid codes, but it was also a time when those codes were being broken,” said Ty. “Women were trying to talk about feminist issues before they were law. For women, there was no way of owning property and no recourse if they left their home. Women would write about these scenarios, and by doing so, showed how society needed to be reformed.”

Outlander acts as a form of “wish fulfilment” for women, who see a strong, smart woman breaking societal expectations with her intelligence and sexuality.

Ty says Outlander’s empowered heroine reflects the changes in romance novels since the 18th- century. Heroines were once known for being virginal, pure and innocent characters.

“Today, there’s more of an emphasis on sexual pleasure and marriages of convenience,” says Ty. “If you think about Fifty Shades of Grey, it’s clear that women are searching to fill a vacuum in their lives to address that a lot of mainstream films and media still don’t take the women’s point of view. So Outlander is part of this trend to see empowered women on screen.”