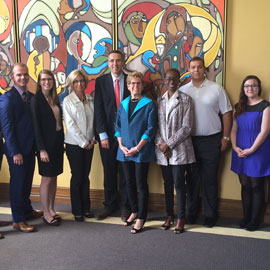 Students attended question period and met with Ontario Premier Kathleen Wynne as well as the Deputy Leader of the Conservative Party and the Liberal and New Democratic Party (NDP) house leaders. Daiene Vernile, MPP for Kitchener Centre and a Laurier graduate, also chatted with the students about the political process.

Students spoke to the premier about how she sees her role in terms of cooperation with the opposition parties and achieving her legislative agenda. They also spoke with the house leaders about how each of them approaches the legislative process and how they work with members of the other political parties.

“Attending Queen’s Park was a truly eye-opening and fantastic experience,” said Chris Tansella, a student in the Master of Applied Politics program. “During question period, I experienced what I thought was unruly behavior; however, after meeting with all three of the parties and the Speaker, I quickly learned that heckling is a strategic tactic. The technique is used not only to distract the MPP speaking, but also to force the Speaker to halt proceedings if a question is being answered well or to give a member of your party a momentary break if he or she is in a tough spot.”

This is the first year of the Master in Applied Politics program. The 12-month program incorporates a Certificate of Practical Politics for students who complete four of six workshops offered through the academic year.

“We want students graduating from the program to be able to hit the ground running – with a real toolbox of skills that they have road-tested with practitioners throughout the program,” said Debora Van Nijnatten, associate professor and chair of Laurier’s Political Science Department. “While we certainly believe that it is critical for students to understand and master the debates and methods in the discipline of political science, we also need to ensure that they can translate conceptual understanding to the world of ‘practical politics.’”