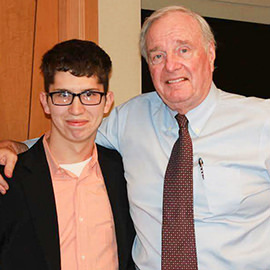 Cody Groat’s time at Wilfrid Laurier University represents more than just a chapter in his life. The result of his undergraduate years is, quite literally, an entire book.

Groat released his non-fiction work, Canadian Stories, in July. He will host a book signing on Laurier's Brantford campus at the Sanderson Centre Sept. 15 from 3 p.m. to 5 p.m.

“When I was 18 years old and starting out at Laurier Brantford, I heard about a man by the name of John Turmel,” said Groat. “Turmel holds a world record for losing the most elections ever. I was shocked to discover that he lived only three blocks from our campus. I knew I had to meet him.”

Groat did meet Turmel, interviewing him under the premise of an online column he said he planned to start on famous Canadians. It was a fateful event, sending Groat’s natural curiosity levels from piqued to insatiable. “The passion I found from interviewing John soon overwhelmed me,” Groat said. “I spent hours a night researching who I could interview next.”

Flash forward a few months, and Groat was sitting down for coffee with former Prime Minister Paul Martin. He continued to reach out to Canadians whose life stories intrigued him, and eventually found himself Skyping with former Prime Minister Kim Campbell, talking over tea with Academy Award-winning director Norman Jewison, and abandoning his basket at the grocery store to accept a call on his cellphone from comedy legend Dan Aykroyd.

“I realized I didn't just want to write a word-for-word transcription, or the life story of the people I was meeting with,” Groat said. “I decided that I wanted each interview to be the story of my adventure, almost like this was a novel with me as the main character, each chapter focusing on a different adventure.”

The best of those adventures are now compiled between book covers under the title, Canadian Stories. Over 30 famous Canadians are featured in the self-published work, including the late Farley Mowat, Cardinal Thomas Collins, CBC icon Peter Mansbridge, and Michael Stark and Michael Leshner, Canada’s first legally married same-sex couple. The book’s introduction features John Turmel, the interview subject who started it all.

Cody launched the book in his hometown of Ingersoll, Ontario. He pledges that 40 per cent of profits from book sales will go to registered Canadian charities as a way of thanking interviewees for their time.

While this book is complete, the story is far from over. Groat will be leaving for England in the fall where he will be pursuing his Masters of Arts degree in World Heritage Studies at the University of Birmingham. “I’ve already been making calls,” he said, smiling, revealing that interviews are being booked, and a UK-based book is already in the works.