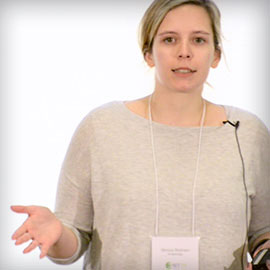 While completing her undergraduate degree in life sciences, Monica Molinaro, now a Master of Science student in Kinesiology at Laurier, volunteered at the Ronald McDonald Family Room at McMaster Children’s Hospital. One day while Molinaro was volunteering, a six-year old girl who was battling cancer approached Molinaro to play. The girl, bald, underweight, and with surgical scars on her head, engaged Molinaro in a “normal, kid conversation” about school, toys, and her favourite colours. Afterward, the girl’s teary-eyed mother thanked Molinaro and told her that she was the first non-family member the girl had opened up to since being hospitalized.

This experience helped to shape Molinaro’s next step in her academic career.

Like some of her peers in her program, medical school was an option, but Molinaro became more interested in research while completing her undergraduate thesis. In the end, Molinaro chose graduate school. She knew that she wanted to learn the stories of those she had met and talked to while a volunteer at the children’s hospital, but she had to find the right graduate program.

“I found Paula Fletcher’s faculty profile on the Laurier website, and her research focus on the lived experiences of individuals with chronic illness and disabilities intrigued me,” said Molinaro. “I emailed her late at night, and to my surprise, Dr. Fletcher emailed me back within five minutes.”

With Fletcher as her graduate supervisor, Molinaro studied the late effects of pediatric cancer. As she explained in her 3-Minute Thesis presentation, she interviewed both pediatric cancer survivors in their adult years as well as their caregivers. Her study found that many of interviewees suffered physical and psychological effects such as amputations, infertility, survivor’s guilt, depression, and cognitive deficits.

“Sadly, we also found that there were social effects like bullying, such as being called ‘tumor boy’ or ‘cancer girl’ by their classmates while they were going through treatment,” said Molinaro.

Molinaro says that even with the social and psychological effects, many of the interviewees said that there were benefits to going through cancer. Their experiences with cancer shaped them as adults, and many wanted to give back to the community.