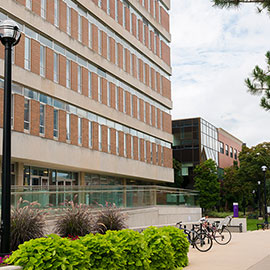 On a warm evening in late September, 2015, Waterloo Region’s leading female scientists, a strong contingent of Laurier graduate students, and their friends and supporters made their way to Laurier’s Waterloo campus Library for a party.

The occasion: the launch of #DistractinglySexist, an exhibit of photo portraits and the accompanying stories of 10 female scientists imagined by Eden Hennessey, a PhD student in social psychology currently completing a thesis on the subject of sexism in the sciences. The exhibit would go on to earn coverage in the CBC and other media, and has since led to several other exhibition and speaking opportunities for Hennessey.

“This exhibition, and the mentorship I received in putting it together, literally changed my life as a researcher,” says Hennessey, who received support for the project from a joint fund set up by the Library and Graduate Students’ Association. “I’ve found a whole new way to share and communicate about my work – one that expresses a different part of who I am and reaches a new kind of audience with my findings.”

A shifting role for academic libraries

For much of the 20th century, the role of academic libraries within universities was relatively static, clear and secure. Libraries were, first and foremost, places where students and faculty could find and work with books and journal articles in printed form, more or less as they had done for centuries.

But in recent years, that role has shifted considerably, as digital technology has lessened the need for traditional physical collections and as rising student numbers have placed a premium on study and meeting spaces.

“In Waterloo, we have always had an amazing ecosystem for helping business start-ups and emerging tech talent to shine – incubators, accelerators, mentorship programs, but the artistic and creative communities don’t always have access to the same kind of support.”

Laurier’s Library is adapting to this new environment in a variety of ways: developing a robust digital collection, building superb on-site study and meeting spaces, joining resource-sharing networks with other universities, and enhancing its collection of unique archival materials.

It is also taking the opportunity to dip its foot into a new area altogether: creative and artistic talent incubation.

Incubating the arts and creativity

“In Waterloo, we have always had an amazing ecosystem for helping business start-ups and emerging tech talent to shine – incubators, accelerators, mentorship programs, but the artistic and creative communities don’t always have access to the same kind of support,” says Gohar Ashoughian, Laurier’s university librarian. “We saw an opportunity for Laurier, with its strong artistic tradition, and the Library in particular, with its broad mandate and inviting spaces, to help fill a gap.”

The project started modestly in the fall of 2013, with a concert series for Laurier music students looking to hone their chops and gain audience feedback, called Music in the Library. When that went well, the team began adding exhibits (such as Hennessey’s) featuring student and community artists, as well as a biannual Community Author gathering for student, staff, faculty and alumni authors, which launched in the fall of 2014.

Then in the spring of 2015, with the university going through a restructuring process, two other university units were incorporated into the organizational structure of the Library: WLU Press, one of Canada’s great scholarly presses, and the Robert Langen Art Gallery.

“We saw an opportunity to leverage the amazing in-house talent at the press and gallery – among our many other collaborators – to help build up our arts and culture incubation activities,” says Nick Dinka, the Library’s director: communication and culture programming.

Dinka, an alumnus of Laurier’s LaunchPad startup incubator program, likens the approach to the “lean” methodology favoured by early-stage startups, which evolves rough ideas in response to feedback from the community.

Since coming on board, Robert Langen Art Gallery curator Suzanne Luke has begun exhibiting art work in a provisional space on the Library’s main floor, and launched a new “LIFT Series” of exhibits featuring community artists in a series of “microgallery” spaces on the Waterloo campus Library’s upper floors. In addition, the team has begun collaborating with WLU Press on various author readings and book launches hosted at the Library.

“It’s been a really exciting time for me and for the gallery,” says Luke. “We’ve been able to explore new ways of providing a visual arts program that stimulates, challenges and provokes questions, while at the same time enhancing our collaboration and interaction with students and the broader community.”

With the initial phases of the gallery and press integrations completed, the Library is looking to scale up its arts and culture incubation activities starting in the fall.

A prominent new permanent home for the gallery is currently under construction on the main floor of the Waterloo campus Library. Slated to launch in October 2016 with a show by prominent Canadian arts duo Eve Egoyan and David Rokeby, it will include a gallery shop that will sell work by visiting artists and by Laurier students and community members.

The Press will move into new offices in the Library around the same time, and an outdoor stage/amphitheatre was recently completed adjacent the Library’s main entrance. With all of this infrastructure in place, the team is preparing to launch a ramped up 2016-17 Culture Series, including concerts, readings, theatrical performances, films, Community Author 2016, workshops and more.

“We have a number of surprises up our sleeve for 2016-17,” says Dinka. “For audiences, artists and probably for ourselves too. That’s one of the nice things about a project like this – it’s constantly evolving. Every time you turn the page there’s a new and unexpected twist.”