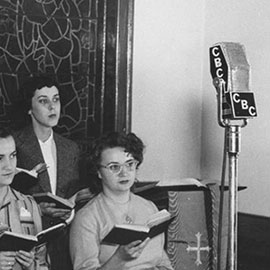 Laurier professors on public broadcasting and the CBC at 80

Laurier professors on public broadcasting and the CBC at 80

On Nov. 2, the Canadian Broadcasting Corporation (CBC/Radio-Canada) celebrates its 80th anniversary. The crown corporation and nation’s public broadcaster set to achieve unique goals since its inception — chief among those has been to ensure that voices from Canada could be heard throughout a geographically vast country, while not being diminished by the power of American broadcasters.

The CBC/Radio-Canada has a long history of serving remote communities. It stepped into a role that private media companies saw as unprofitable, says Peter Urquhart, associate professor of Communications Studies at Wilfrid Laurier University.

“In the early days, there weren’t other organizations providing truly national news — bringing stories from remote areas to central Canada and vice versa,” says Gillespie. “The founders of CBC/Radio-Canada saw there was a niche that could be filled.”

“Over its history, it has set a tone for journalism in Canada... It still has a lot of talent and hunger to do important journalistic work, and to deliver on the expectations and costs of public broadcasting.”

Both Gillespie and Urquhart recognize CBC/Radio-Canada’s function in building a greater sense of national identity. But the challenges that broadcasters face today are different than those of the early and mid 20th century during the broadcaster’s early days.

“There was a mass audience for television in the 1950/60s. Millions of homes tuning in to Hockey Night in Canada in English and French can have a pretty profound affect on the unity and identity of a country,” says Urquhart.

“But the media has evolved enormously,” he says. “Today, there are far fewer people watching or listening to CBC/Radio-Canada television or radio broadcasts — and that’s true of almost all media. There is a surplus of broadcast options that audiences can consume, and that has created enormous fragmentation.”

This declining audience, says Urquhart, raises criticism of public broadcasters. For example, is it fair for private news broadcasters — that are facing shrinking revenues — to be in direct competition with a state-funded media corporation?

“CBC/Radio-Canada has the most visited news site in Canada — perhaps that’s because there’s no pay wall that, for example, The Globe and Mail imposes in order to generate revenue,” says Urquhart.

“When an aspect of a media system isn’t controlled by corporate interests and operates at arm’s length from the government, there’s greater opportunity for the media to do what is expected of it in a free and democratic society,” says Urquhart.

Gillespie stresses the gold standard that CBC/Radio-Canada has established.

“Over its history, it has set a tone for journalism in Canada,” says Gillespie. “It still has a lot of talent and hunger to do important journalistic work, and to deliver on the expectations and costs of public broadcasting.”

While private broadcasters face declining revenue, Gillespie says that CBC/Radio-Canada has faced its own operating challenges.

“We’ve seen a lot of lay offs and changes to the CBC/Radio-Canada’s funding structure — it’s quite different today than 25-30 years ago,” says Gillespie. “They’re trying to do more with less.”

The CBC/Radio-Canada’s Strategy 2020, Gillespie says, is an attempt by the organization to reorient itself to the type of local news reporting that it started with 80 years ago. Importantly, though, it has shifted its primary focus to digital channels to disseminate news content.

“What we’ve seen in the past is a decline in the availability and quality of local news in Canada, except for in major metropolitan areas,” says Gillespie. “CBC/Radio-Canada is responding by saying, ‘we want to rearrange our news reporting teams around the principle of getting local news to people first through our digital applications and our website, because that’s where we believe we can build and serve our audience.’

“This digital-first approach could be more cost effective — and we see it being rolled out in communities like Hamilton, Kitchener-Waterloo, Saskatoon and Kamloops.”

Urquhart sees CBC/Radio-Canada’s podcast production as part of the organization’s shift to focus on new digital audiences — programs like Love Me and Grownups Read Things They Wrote as Kids.

“There’s a struggle to monetize podcasts — and the audience is relatively small compared to radio,” says Urquhart. “But the balance is shifting. New media, such as podcasts, is gaining in popularity and CBC/Radio-Canada is certainly going all in on the opportunity.”

Canada’s public broadcaster was tasked 80 years ago with building a national identity through cultural and news programing. While the media landscape has changed, the goal to deliver news and programming that connects coast to coast to coast remains a central priority for CBC/Radio-Canada. How well it continues to adapt and succeed in the digital age is a new and exciting part of the crown corporation’s history.

The photo used in this story is from the Wilfrid Laurier University photograph collection. Taken in 1949 or 1950, it shows the Waterloo College Chapel Choir performing in the Willison Hall Chapel, in front of a CBC/Radio-Canada microphone.