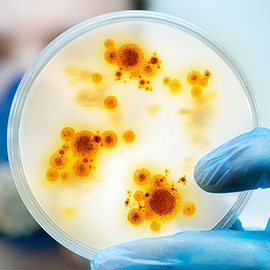 The fear of influenza and deadly viruses as they are portrayed in the media has become a real-life problem for many people.

But understanding why media and popular culture portray viruses in a certain way is an important exercise in critical thought, says Penelope Ironstone, associate professor of Communications Studies at Wilfrid Laurier University.

A full-time faculty member at Laurier since 2003, Ironstone is a social and political theorist who has studied viruses, infections and pandemics since the early 1990s. She teaches risk and health communication, theories of moral panic and risk in society, as well as science communication. In 2008, she received a grant from the Social Sciences and Humanities Research Council to explore the cultural life of viruses.

“The flu is boring — we all get it, use it as an excuse to call in sick to work and stuff our cabinets with medicine to deal with it,” says Ironstone. “But there’s something very interesting in media and popular culture responses to the flu.”

Influenza, as the flu is more scientifically known, is presented as a dastardly thing. Ironstone believes that moral panic theory can explain, in part, why that is the case.

Simply stated, populations respond in very particular ways when they feel afraid. Since the late 1990s, there has been an increasing level of anxiety about the flu as organizations including the World Health Organization and Centers for Disease Control and Prevention have worked to raise public awareness.

“As much as popular culture can increase anxiety, it can also offer the fantasy of control.”

Compounding the situation is how the news media uses anxiety and fear to its commercial benefit, says Ironstone, who takes issue with the laziness of storytelling in journalism covering outbreaks.

“There are formulas — the media starts with concern, uncertainty and panic and then shifts to a calming effect,” says Ironstone. “Think of the use of military or natural disaster metaphors, such as ‘epicentre of the outbreak,’ that are used by journalists — the media is notoriously bad at coming up with new ways to tell stories.”

It is also common for news media stories about viruses to reference deadly historical experiences, says Ironstone. For example, the influenza pandemic of 1918 is often discussed when the media talks about the possible severity of the next flu outbreak that is “just around the corner.”

The reality is that we are the healthiest generations in history. Yet, we have lingering stories of dread and disease contradicting that reality, says Ironstone. While it is easy to come up with conspiracy theories about government control and the profit of pharmaceutical companies, Ironstone says it is important to think critically about how and why this anxiety is generated.

Films like the 2011 thriller, Contagion, can play off of anxiety and fear. Showing the trailer in her class caused several of Ironstone’s students to quickly acknowledge unconscious gestures and how something so very simple — like the amount of times someone touches their face with their hands — can be problematized.

Ironstone recounts how Contagion’s director, Steven Soderbergh, wanted to “do for the elevator button what Jaws did for the beach.” But the flu is not terribly photogenic — it’s not a dramatic virus. The film needed something more sensational, so its makers devised a virus with vivid symptoms.

In addition to blockbuster Hollywood productions, Ironstone identifies the docudrama genre as a contributor to the cultural life of viruses. ABC’s 2006 film, Fatal Contact: Bird Flu in America, is a prime example, whereby historical experience, scientific predictions and sensationalism are combined to present a worst-case scenario.

Why do we watch these dramatizations? Ironstone suggests that people might see them as an indication of what an appropriate response would be to such a situation.

“As much as popular culture can increase anxiety, it can also offer the fantasy of control,” she says.

Consider the board game Pandemic, first released in 2007. The premise is for specialists, played by individuals, to counter-intuitively co-operate to prevent disease from wiping out humanity. The game gives players not only the fantasy of control, but also a sense of the roadblocks and co-ordination involved in curtailing a pandemic. The game might actually sway people’s opinion and fear of outbreaks, says Ironstone.

Is Zika any different?

Ironstone suggests that information about viruses is communicated as just one in a series of “infinitely substitutable risks.” That is, the formula is applicable to E. coli in water or Listeria in salmon as much as it is to environmental or geopolitical risks.

The latest virus to dominate headlines is Zika. Apart from minor symptoms, most healthy people who contract the virus do not have negative affects. But there are two very different representations and realities for people who are susceptible to and affected by Zika, says Ironstone.

There is concern about pregnant women and microcephaly in infants. For that reason, how Zika is treated in the media — and the way people are encouraged to deal with mosquitoes and mosquito-borne infections — is unique, says Ironstone.

What is truly troubling, she says, is how the representation of Zika demonizes disability, while also problematizing a cultural, social and religious background — that of predominantly Catholic Brazil. The portrayal of Zika was made more complex by the Rio 2016 Olympics.

“Society accepted the risk aversion of some high-end athletes who decided to avoid the Games, yet there were and are individuals in Brazil who don’t have the choice to avoid the reality of Zika,” says Ironstone. “These portrayals circulate in the way we talk about and understand the virus.

A recent development in the cultural life of viruses is how individuals are resisting information — something we have seen play out since the H1N1 flu virus, says Ironstone. Criticism was aimed at WHO for jumping the gun, causing widespread panic and not effectively managing public uncertainty.

“We’ve started hearing people say, ‘I never get sick. They’re just lying to us. It’s the pharmaceutical companies behind this,’” she says.

Ironstone suggests there has been a shift toward individual responsibility versus collective public health responses to potential outbreaks since the 1970s. This fragmentation is reinforced by how information is spread. Up until the era of television and film, how viruses were presented was very fixed. Today, the Internet can oversimplify complex issues and quickly spread misinformation and fear.

Flu season is here. Make a healthy choice and be critical of the source when considering information about the risks.