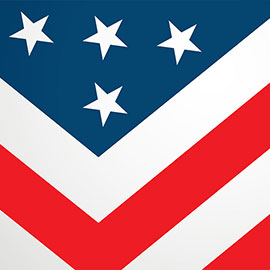 Laurier professor on the U.S. election and teaching the dysfunction of American politics

Laurier professor on the U.S. election and teaching the dysfunction of American politics

From the primaries to debate nights and everything in between, this year has offered a feast of entertainment to anyone interested in the American political system. Among those are Laurier Associate Professor of Political Science Barry Kay and the students enrolled in his second- and fourth-year classes.

Kay, whose academic research has focused on public opinion and elections, has taught a range of courses on electoral behaviour and public policy in Canada and the United States.

“Certainly last winter when we were having discussions during the primaries, the mode of support was very much for Bernie Sanders over Hillary Clinton. I’m sure there is some, but I don’t think there is a great deal of support for Donald Trump,” says Kay.

On Nov. 8, Americans will go to the polls and the world will eagerly anticipate whether the next U.S. president will be Democratic candidate Hillary Clinton or Republican candidate Donald Trump.

“The polarization we see in this election, which we’ve talked about this term, plays directly into how the American government doesn’t work very well.”

While Kay is careful to ensure his students are comfortable, and is conscious of questions that invite highly partisan responses, he gives the opportunity for discussion to critically consider developments in each candidate’s campaign. More unique is Kay’s commitment to hands-on assignments, which fits with the political science program’s increasing focus on providing a more practical educational experience, says Kay.

This fall, in his second-year class on the polarization of American politics, Kay is asking students to provide an assessment of a congressional candidate’s campaign, as if they were hired political consultants.

“We don’t always have presidential elections, though half of the years there is a midterm or congressional election in the United States — there’s always something going. So I design practical assignments and special contests that will give students a different experience and a bump in their grades,” says Kay.

On the polarization of American politics, Kay says that the Trump candidacy is contributing to an ongoing trend in a unique way, especially because he is an unconventional Republican holding views that are incompatible with Republican orthodoxy.

Nevertheless, Kay says, the intensity of enmity and cultural distinction between blue and red states is getting worse. This reality feeds into part two of his second-year course, which focuses on the culture of the presidency, Congress, judiciary, civil rights interests, foreign policy and the dysfunction of the American political process.

“The polarization we see in this election, which we’ve talked about this term, plays directly into how the American government doesn’t work very well,” says Kay. “There’s good reason for people to want change.

“The bottom line, however, is that domestic policy won’t change regardless of who wins the election,” says Kay. “The problem isn’t the presidency — it’s the whole system.”

Kay points out that Clinton will face a Republican-controlled House of Representatives and a Senate that’s virtually split down the middle. To think that significant domestic legislation will correct the myriad of problems in America is not realistic.

The one exception where the president is less constrained by congress is foreign policy, says Kay.

“If Trump is elected, God only knows what will happen. He’s said all sorts of silly things regarding nuclear arms and the NATO alliance, for example, which have driven many Republican neo-conservatives toward Hillary Clinton even though they don’t like her at all,” says Kay.

Kay attributes the rise of Trump to populist appeals, but he also believes that Trump has been obliged to modify his campaign tactics. For example, he has started using teleprompters, which he ridiculed Clinton for, and he collects money from others, which he felt he did not have to before.

“There are certainly fringe elements including the alt-right, which clearly has racist implications that he’s tried to latch onto, but they’re not central to Trump,” says Kay. “I don’t think he believes in much of anything except for self-promotion. He’s become a chameleon and will say what he thinks any given audience wants him to say — and if that’s something racist in orientation, he’ll do that as well.

“He’s not somebody who works in conventional ways; but without question, he has a populist appeal — anybody who’s unhappy with the system, particularly less educated, middle aged, unemployed white men, find him very appealing.”

While Trump might be gaining ground with working-class voters who may not have voted before or who have traditionally supported the Democratic candidate, he is losing support among college-educated voters compared to how well Republican candidate Mitt Romney did in the 2012 presidential election. Trump is also turning a lot of people off — especially women, says Kay.

These factors combined are contributing to a very different election, which will surely make for lively political science classes over the next few weeks at Laurier.