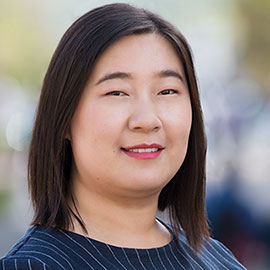 The next time you’re in line at a coffee shop or food court, try being more attentive and reflective — it could help you make healthier choices.

With funding from the Social Sciences and Humanities Research Council, Laurier graduate student Wan Wang has been researching the benefits of mindfulness and healthy eating as part of her PhD in social psychology.

Working under the supervision of Laurier Associate Psychology Professor Christian Jordan, Wang studied 100 Laurier students, who were recruited through the Psychology Research Experience Program. Wang found that mindfulness — defined as a conscious, non-evaluative state of being attentive to and aware of present events — predicts healthier eating behaviour.

With origins in Buddhism, mindfulness is a conscious state of living in the moment. It is a dispositional capacity that varies across individuals; yet previous research shows that more mindful individuals report greater self-esteem, life-satisfaction and happiness, and self-regulation capacity.

“Mindfulness focused on eating specifically can be really useful, but general mindfulness programs and apps have become increasingly popular,” says Jordan. “Wan’s research suggests that these programs may have unintended benefits by encouraging lower calorie consumption and healthier food choices.”

“People should try incorporating mindfulness practices into their daily routines for a present-focused, healthier living style.”

To assess dispositional mindfulness, Wang had students complete a mindful attention awareness scale. Test participants were then put through a mentally challenging task or an easier, control condition task. Wang and her team then measured their attitudinal preferences for fruit and sweets using a feeling thermometer.

“As students left the lab, they believed the experiment was over. We thanked them for participating by offering them an opportunity to choose either a fruit — an apple or orange — or something sweet — chocolate or cookies,” says Wang. “All participants took something, and we used that as a behavioural measure of snack choice.”

Wang found that the more mindful individuals reported greater attitudinal preferences for fruit over sweets and were more likely to actually choose fruit to eat. In fact, more mindful people made healthier snack choices independent of whether they were mentally drained by the challenging task.

“The behaviour we measured is quite similar to what people, as consumers, do at Starbucks or in line at a food court,” says Wang. “It’s this aspect of social psychology that initially interested me in the research — we’re measuring some daily behaviours that are tightly connected to people’s health and psychological well-being.”

Wang began studying psychology during her undergraduate degree at the University of Winnipeg, and as a master’s student at Laurier. But her interest in social psychology started at a young age while growing up in China.

“I was interested in what people were feeling and how they were behaving when others were present,” says Wang. “I increasingly realized the importance of psychology in how it could help people reflect and change.”

Historically, Wang says, research on eating and mindfulness has focused on individuals suffering from eating disorders. But she has seen a shift in how social and even clinical psychologists are conceptualizing mindfulness and eating behaviour for the general population.

“In social psychology, we largely focus on studying mindfulness as a general quality of attention and awareness,” says Wang. “Psychologists have been able to convey mindfulness in a scientific way to actually make incremental change in every day life,” says Wang.

Mindfulness meditation has been used successfully in treatments for depression and anxiety. Wang says that inducing mindfulness in daily life can gradually help people improve their mental health, and — as her study shows — preferences for and choice of healthier food.

“Wan’s research on mindfulness and eating behaviour is extremely important. Mindfulness has been used successfully to treat eating disorders, but little is known about how it could influence everyday eating behaviour,” says Jordan. “Her work is notable, not only because it focuses on pretty mundane — but consequential — eating choices, but also because she does not focus on instructions during her experiment that specifically encourage mindfulness in eating.”

There are several reliable ways to induce mindfulness in brief experimental sessions, says Wang. One common way is to let people hear 10-15 minutes of guided meditation that has them gradually notice breathing patterns and sensations from head to toe. Another way to induce mindfulness is to let people eat raisins while being fully aware and nonjudgmental — having them notice the taste, the texture and the feeling on the tip of their tongue.

“It’s an experiential process for people to become more aware of what’s taking place in their internal and external environments,” says Wang. “People should try incorporating mindfulness practices into their daily routines for a present-focused, healthier living style.”

Learn more about Wang’s research by reading her co-authored article in Personality and Individual Differences.