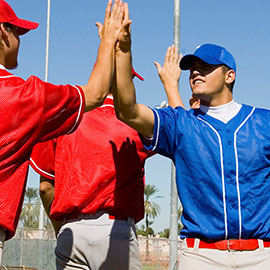 It was no surprise then, that a fourth-year Laurier course on the advanced psychology of physical activity — particularly a subsection on group dynamics — piqued his interest.

“I always thought about the social relationships developed through sports, but I never really thought about them on a deeper level until that course,” says Benson. “It’s really interesting to understand the group dynamics at play.”

His fascination eventually led him to pursue a doctoral degree in social psychology at Laurier, and gave him the opportunity to work alongside Canada’s preeminent experts on group dynamics in sport.

During his undergraduate fourth-year kinesiology course, Benson approached instructor Mark Eys, professor of Kinesiology/Physical Education and Psychology, with questions about how sports teams cope with group dynamics. Little time passed before Benson found himself working on his master’s degree and then his PhD in social psychology with Eys, who also holds a Canada research chair in group dynamics.

Benson is interested in the newcomer integration processes that occur within the context of highly competitive sports teams.

“This friction is something that coaches should pay close attention to, especially when monitoring the team’s high-performance level, social aspects of belonging, and the development of strong student-athletes."

Early in his graduate studies, he found that there was a significant body of research exploring workplace socialization for new employees, but that the findings had not been adapted to the sporting context. Since then, he has worked as a part of Laurier’s Group Dynamics and Physical Activity Laboratory, which aims to better understand group and social influences on cognitive, behavioural, and affective factors related to physical activity in group contexts.

“In sports teams, similar to military and many other types of organizations, there are interdependent tasks where everyone has to work together,” says Benson. “Athletes sometimes have roles they have to fulfil for the greater good of their teams, but it might not be personally satisfying for them.”

Friction on the field can create off-field conflict, particularly over issues such as who has been starting matches or receiving more playing time.

“This friction is something that coaches should pay close attention to, especially when monitoring the team’s high-performance level, social aspects of belonging, and the development of strong student-athletes,” says Benson.

Athletes may accept their roles — they are willing to sit on the bench for two or three years — because they’re developing great relationships and have a positive sense of affiliation, says Benson.

“People on teams share these uncertainties about what their role will entail,” says Benson. “Having positive social relationships is really important, even in performance-oriented contexts.”

During his doctoral research with Eys, which was funded by the Social Sciences and Humanities Research Council (SSHRC) and a Sport Participation Research Initiative through Sport Canada, Benson studied university coaches and athletes — both newcomers and veterans — to understand what processes and dynamics unfolded when teammates joined the group, and what strategies coaches were using in these highly competitive environments.

“One of the great things about interviews with coaches and athletes is that you’re getting these rich recollections based on their personal experiences,” says Benson. “As you get a better descriptive understanding of these processes, you really want to dig down to understand consequences.”

Benson says although we know that competitive university-level sports teams hold intensive training camps, no one has examined the specific ways that newcomers are integrated into these groups during this timeframe, and the consequences of different strategies from a group dynamic perspective. He wanted to know how coaches managed the social dynamics in the group after the arrival of newcomers.

Benson found that in addition to their focus on tactical strategies and skill development, coaches are quite cognizant of the social dynamics between newcomers and veterans. Some go out of their way to organize social events that are unrelated to sports in hopes of creating a more positive team dynamic, and in turn, better performances down the line.

Since defending his PhD in July, Benson has started a SSHRC-funded post-doctoral fellowship at Nipissing University, where he researches youth-level sports through the Group Dynamics and Youth Development through Sport and Physical Activity Laboratory.

“Alex’s research has shed some light on a precarious time in any group’s development,” says Eys. “Thinking about the integration between new and existing team members is a relevant topic across many contexts including sport, business, music, and many others.”

At Nipissing, and with his ongoing projects at Laurier, Benson is filming pre-scripted coach-athlete interactions and collecting data on coaches’ and athletes’ reactions to what they see unfold. He and colleagues are also currently using structured daily diaries to better understand the day-to-day events that unfold within sport teams.

“We’re still early in this area of research, but it’s an important and interesting dynamic to understand how to manage groups in a way that optimizes individual and collective outcomes.”