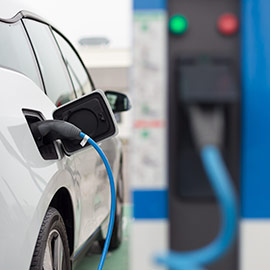 Research has shown that when it comes to how people behave when purchasing radically new technology, their decision is often rational and based on weighing the cost versus the benefit of having that new piece of technology.

But Tripat Gill, associate professor in Marketing at Wilfrid Laurier University's Lazaridis School of Business and Economics and Canada Research Chair in Market Insight and Innovation, thinks something else is at play when it comes to consumer adoption of innovative technologies.

In some instances, the existing rational process model of consumer adoption is true. But in other cases, even when the consumers see the benefits versus costs as favourable, they still don’t adopt a product.

Gill believes emotions may be involved, and is looking to study their role in the adoption of technological innovations that are radical and disruptive. Specifically, he will research why electric cars haven’t taken off and the barriers to adopting self-driving cars.

“A rational argument would be in favour of electric cars,” said Gill. “They are cheaper to run, better for the environment and the government offers subsidies for them, but we’re not seeing that massive shift in consumer adoption.”

Surveys have also shown that people are largely in favour of electric cars and would consider buying one, but their behavior reflects differently.

“People just aren’t getting excited about the electric car, and they don’t feel an emotional affinity for it,” said Gill. “Most car manufacturers have been offering electric cars to consumers for the past decade based on the assumption that rationally speaking, people would want to buy them, but that’s not happening.”

Gill plans to develop a model that accounts for this intangible emotional drive that influences consumer adoption. He will test it with real examples of disruptive technologies and why they are or are not adopted. He is planning to survey consumers to understand how emotions and the rational model of “cost versus benefit” work together to influence consumer adoption of innovations.

“When it comes to change, there are people on both ends of the spectrum, but overall, people don’t like change,” said Gill. “There’s a sense of risk and uncertainty around new things, but they also like novelty. We need a model of consumer adoption that accounts for these emotions and the role they play in how society adopts innovative products.”

This new model will help marketers and industry understand how to better influence consumers to adopt radically innovative technology, especially technologies that benefit the environment and consumer safety.