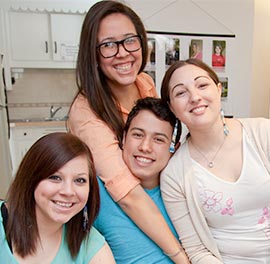 The Wilfrid Laurier University Students' Union (WLUSU) recognized the Aboriginal Students’ Association (ASA) with the "most active club" award for 2014/15.

It's a new milestone to have ASA recognized for its contributions to the Laurier community and to the campus through active involvement. Over the past five years, ASA has held a variety of social and cultural events, including pow-wow trips, moccasin making, Wilf’s dinners, movie nights and much more. The goal of ASA is to provide Aboriginal students with a place to come together and celebrate their heritage while also educating the general public.

“Winning this award was such a huge step; we’ve always been a relativity small club, so to have WLUSU notice us and the work we’ve been doing was so rewarding," said Rachael Simon, 2014/15 president of ASA. "It’s reassuring that what we are doing is meaningful and is accomplishing what we want, which is bringing awareness of the Aboriginal population on campus, all while supporting our students.”

ASA is just one of more than 150 active clubs in the Laurier community on the Waterloo and Brantford campuses. The clubs fall under a number of categories, including arts, business, charity, personal interest, science, and religion and culture.

Getting involved in Laurier’s clubs offer many benefits to students, including: hands on experience in everything from event planning to volunteer management; the opportunity to meet people with similar interests and passions; recognition on the student co-curricular record; and a fun way to get involved in the Laurier community.

Here is just a sample of some Laurier clubs: