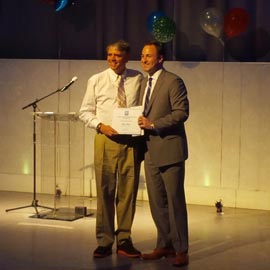 Wilfrid Laurier University’s Director of Residence, Chris Dodd, received the Award of Excellence at the Ontario Association of College and University Housing Officers (OACUHO) annual spring conference June 10 at York University. The award is presented annually to an individual who has demonstrated a high level of commitment and outstanding leadership in the field of housing at their institution while also providing exemplary service to students.

Dodd has become a leader in student affairs since coming to Laurier in 1999, and has played a large role in establishing the direction of Laurier’s residence operations as well as the student affairs community in Canada as a whole.

“Chris is so deserving of this very special award and the recognition of his vast experience and contributions to an exceptional student residence experience,” said David McMurray, vice-president of Student Affairs. “Laurier is viewed as a national leader in this regard and Chris has contributed immensely to that honour.”

Dodd has been able to connect the core function of residence and student affairs to student success. Under his direction, Laurier’s residence operations has been responsive to the shifts of Canadian students’ needs and has become a vital tool for first-year students to transition to university and connect to on-campus resources.

“The values Chris espouses are lived out in his work and, in turn, are adopted by many successful professionals that Chris works with closely,” said Dave Shorey, associate director of Residence Education, who nominated Dodd and presented him with the award. “Chris is able to inspire a passion for student affairs in those that have worked directly with him or have worked in the Laurier residence program. In short, his impact is far reaching.”

Receiving the award was something Dodd did not expect but he is proud that other institutions strive to emulate Laurier’s program.

“It was a complete surprise and unbelievable honour to receive this award,” said Dodd. “Those who have received this award before me were my mentors.”

The Ontario Association of College and University Housing Officers is a not-for-profit organization that supports universities and colleges in Ontario on residence and residence facility issues.