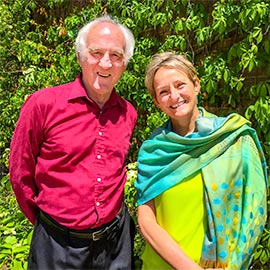 Wilfrid Laurier University Faculty of Music professor, Kimberly Barber, will be co-hosting the Women in Music series on FM 98.5/CKWR starting Sept. 7. The series, hosted by Tom Quick since 2008, has attracted a wide international audience and showcases the talents of female composers, vocalists and instrumentalists.

Barber, associate professor of Voice and coordinator of Laurier’s Opera Program, hopes to put a local and national emphasis on the show.

“I love talking about music and the content focused on women and music at Laurier is really a treasure trove,” said Barber.

Barber, a mezzo-soprano singer, began working at Laurier in 2002 after 13 years in Germany as a house artist at the Frankfurt Opera House and then as a freelance singer. The Guelph native has sung for opera houses and on concert stages in Europe, Japan and North America, and is celebrating the 30th anniversary of her professional debut this season.

Barber plans to introduce Women in Music listeners to local female musicians, especially talent that has been connected to Laurier’s Faculty of Music. From Maureen Forrester, renowned opera singer and chancellor at Laurier from 1986-1990, to recently graduated Laurier alumnae Jane Archibald and Allyson McHardy, Barber says she has plenty of material when it comes to female talent at Laurier.

“Through the series, I will be promoting musical events happening at Laurier and Laurier alumni in music who are doing amazing things,” she said. “Next year is also the 40th anniversary of Laurier’s Faculty of Music, so this is an incredible opportunity to shine a spotlight on Laurier women and the events going in the region.”

Barber will feature her favourite recordings, relating interesting background and anecdotes about performers and composers of choice. She will provide a personal take on many of Canada’s finest female classical vocal and instrumental artists and introduce audiences to the legacy of female singers and instrumentalists while championing women composers both Canadian and international.

Plans for upcoming shows include:

The Women in Music shows can be heard every Monday from 9 p.m. to 11 p.m., with Barber’s shows airing the first Monday of every month starting Sept. 7, on the FM 98.5/CKWR dial or online at www.ckwr.com.