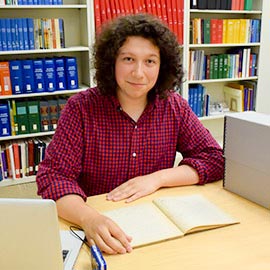 Among Elliot Worsfold’s discoveries while mining the Laurier Archives for information for his dissertation was a letter written by Nils Willison, Laurier’s first-ever graduate, to then-Prime Minister John Diefenbaker, in 1958.

The subject: Canada’s national anthem, and more specifically the phrase “home and native land,” which Willison worried excluded new Canadians: wouldn’t “home and favourite land” be more fitting for a country that prided itself on its immigrant communities?

Diefenbaker’s response, if there was one, is unknown, but for Worsfold, a PhD candidate in History at Western University, the letter seemed to sum up and epitomize his recent research at the Laurier Archives.

“You can see in that letter that process of Canadians from immigrant communities trying to broaden Canadian identity by expanding and subverting previous narratives,” he said.

Worsfold, whose dissertation is a comparative study of ethnic German communities in Canada (Kitchener-Waterloo) and the United States (St. Louis), added significantly to his knowledge during a residence at the Archives as the second recipient of the Joan Mitchell Travel Award. Focusing on the Archives’ Lutheran collections, the most extensive of their kind in Canada, he found a rich trove of information relevant to his dissertation.

“Laurier was originally a Lutheran seminary, and it’s where all the records of congregations are sent, which makes it a special place,” he said. “It can be difficult to find the voices of ordinary people from the past, but having them allows for more nuance and completeness. My research at Laurier has helped me to get that in my research.”

A Kitchener-Waterloo native, Worsfold’s German ancestry might suggest that a personal or familial connection drew him to his topic, but he says he stumbled into the project. For a research project as an undergraduate at the University of Ottawa, he happened to study Francis Weitzel, a Kitchener-Waterloo native of German descent who fought for Canada in the Second World War.

“During World War Two, the pastor at Weitzel’s local Lutheran was trying to stop congregants from speaking German, out of patriotism, and the congregants weren’t happy," Worsfold says. “In the literature, the story is that German Canadians abandoned their ethnic identity in World War One, but that’s not accurate – in World War Two it is still key.”

When Weitzel was passed over for the Victoria Cross, many in the community thought it was on account of his German, and therefore “enemy,” heritage. The historical record doesn’t say whether that was true or not, but the stories Worsfold was finding got him thinking about what it means to be German and Canadian, and he went on to do a master’s on the subject at the University of Waterloo.

Worsfold hopes that his research will help to illuminate how the relationships between immigrant communities and their “favourite” lands evolve – in both positive and negative ways – and how Canada’s unique form of multiculturalism is as much a product of that process as it is of government leadership.

“When we think of multiculturalism in Canada, we think of Trudeau,” Worsfold says. “But multiculturalism is really more of a product of communities working through their place in society – it’s because of ordinary Canadians and not the government that we strive for plurality and inclusivity.”

In mid-July, Worsfold will be leaving for Missouri for a month researching the American half of his dissertation topic, after which he will return to Western to continue teaching and writing. Future visits to the Archives seem likely.

“The people are very friendly and they know their material,” he said. “Coming to Laurier always feels like I am coming home."