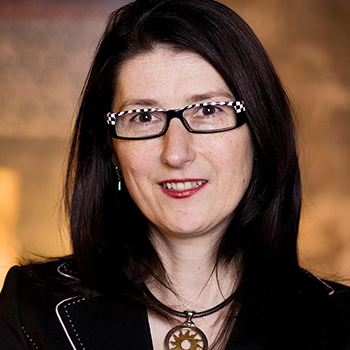 WATERLOO – The C.P. Stacey Award Committee and the Laurier Centre for the Study of Canada (LCSC) have awarded literary historian, biographer and curator Irene Gammel of Toronto Metropolitan University with the 2020-2021 C.P. Stacey Award for scholarly work in Canadian military history.

I Can Only Paint: The Story of Battlefield Artist Mary Riter Hamilton (McGill-Queen’s University Press) makes an exceptional contribution to the field, breaking new ground as a model for histories of war artists and war art. A superb biography of the tragic Mary Riter Hamilton, this detailed study of her life’s work and commitment to her art is also excellent cultural-military, gender and commemorative history.

“In this beautifully illustrated and innovative volume, Gammel takes history to another level,” the committee noted in conferring the award. “She not only recounts the incredible personal story of Mary Riter Hamilton, but also curates the remarkable body of art Riter Hamilton produced on site while visiting battlefields in the immediate aftermath of the Great War. The artist rushed to Europe to paint the war-torn landscape before the graphic consequences of battle could be erased. Her art, much overshadowed in her time by the work of official artists, is itself preserved by Gammel, with generous illustration and vivid description.”

“In this definitive study of Mary Riter Hamilton, Gammel has exhaustively combed global and local archives to reconstruct the difficult, complex life experiences of her subject,” the committee noted. “After retracing Riter Hamilton’s travels and the landscapes the artist visited, Gammel writes so expressively and with such gifted prose that her readers easily imagine the challenging circumstances Riter Hamilton confronted in a Europe devastated by war. Determined to complete her collection as both an artistic and humanitarian endeavour, Riter Hamilton was driven to nervous collapse by the sheer experience and pace of painting on the land. Through careful and detailed reconstruction of the physical, financial and gendered circumstances Riter Hamilton faced, I Can Only Paint reveals much about the military, social and cultural dimensions of artistic production. It is a profoundly important contribution to our understanding of Canadian war art, memory and the portrayal of violent armed conflict.”

The award committee also announced one honorable mention for the 2020-2021 C.P. Stacey Award, Alex Souchen’s War Junk: Munitions Disposal and Postwar Reconstruction in Canada (UBC Press). In an exceptionally strong pool of candidates for the award, Souchen’s work was recognized as innovative, compelling and a major contribution to the field. An exhaustive study of Canada’s disposal regime in the wake of the Second World War, Souchen demonstrates the complexity of unmaking war through reverse logistics, displaying an impressive grasp of institutional, industrial, economic, environmental, material culture and military history.

The C.P. Stacey Award is named in honour of Charles Perry Stacey, historical officer to the Canadian Army during the Second World War and later a longtime professor of history at the University of Toronto.

The C.P. Stacey Award is presented annually to the best book in the field of Canadian military history, broadly defined, including the study of war and society. The award winner receives a prize of $1,000, made possible through the generous support of John and Pattie Cleghorn and the Department of History at Wilfrid Laurier University. The LCSC took over administration of the award in 2018 from the Canadian Committee for the History of the Second World War.

The award committee consisted of Kevin Spooner (Wilfrid Laurier University; director, LCSC), Isabel Campbell (Directorate of History and Heritage, National Defence Headquarters, Ottawa), and Serge Durflinger (University of Ottawa). Awards are normally decided after the end of the year in which eligible books were published. Because of COVID-19, the committee considered books published in both 2020 and 2021 for this year’s award announcement. Learn more here.

Laurier Centre for the Study of Canada