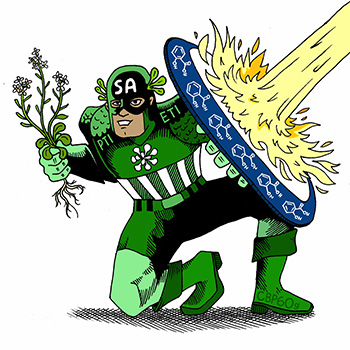 WATERLOO - When heat waves hit, they don’t just take a toll on people – the plants we depend on for food and bioenergy suffer too. As temperatures get too high, certain plant defenses don’t work as well, leaving them more susceptible to attacks from pathogens and insect pests.

Now, the authors of a new study, including Wilfrid Laurier University Assistant Professor of Biology Danve M. Castroverde, say they have identified a specific protein in plant cells that explains why immunity falters as the mercury rises. They’ve also figured out a way to reverse the loss and bolster plant defenses against the heat.

The findings, published in the journal Nature, were found in a spindly plant with white flowers called Arabidopsis thaliana that is the “lab rat” of plant research. If the same results hold up in crops too, it would be welcome news for food security in a warming world.

Scientists have known for decades that above-normal temperatures suppress a plant’s ability to make a defense hormone called salicylic acid, which fires up the plant’s immune system and stops invaders before they cause too much damage. But the molecular basis of this immunity meltdown wasn’t well understood.

Co-first authors Castroverde and Jonghum Kim of Duke University, working with Howard Hughes Medical Institute Investigator Sheng-Yang He, used next-generation genetic sequencing to compare gene readouts in infected Arabidopsis plants at normal and elevated temperatures. It turned out that many of the genes that were suppressed at elevated temperatures were regulated by the same molecule, a gene called CBP60g.

The CBP60g gene acts like a master switch that controls other genes, so anything that downregulates or “turns off” CBP60g means lots of other genes are turned off too. They don’t make the proteins that enable a plant cell to build up salicylic acid.

In collaboration with scientists Shuai Huang and John D. MacMicking at Yale University, further experiments revealed that the cellular machinery needed to start reading out the genetic instructions in the CBP60g gene doesn’t assemble properly when it gets too hot, and that’s why the plant’s immune system can’t do its job anymore. The team was able to show that mutant Arabidopsis plants that had their CBP60g gene constantly “switched on” were able to keep their defense hormone levels up and bacteria at bay, even under heat stress.

Next the researchers found a way to engineer heat-resilient plants that turned on the CBP60g master switch only when under attack, and without stunting their growth, which is critical if the findings are going to help protect plant defenses without negatively impacting crop yields.

The findings could be good news for food supplies made insecure by climate change.

"A dream would be that we can just spray plants when we know there is going to be a heatwave and the possibility of a disease outbreak.”

“Plant infectious diseases already account for a 20 to 30-per-cent reduction in annual agricultural yields globally,” says Castroverde. “Then for every one-degree Celsius increase in global temperatures, we will see an additional annual reduction of 10 to 30 per cent. That’s quite an impending problem, especially if we want to safeguard global food security for this generation and the next.”

To feed the estimated 10 billion people expected on Earth by 2050, forecasts suggest that food production will need to increase by 60 per cent.

Elevated temperature doesn’t just impair salicylic acid defenses in Arabidopsis plants – it has a similar effect on crop plants such as rapeseed (canola), tomato, tobacco and rice. Castroverde and his colleagues are now testing whether their strategy to protect immunity in Arabidopsis plants works in crops as well. So far, they have seen similarly promising effects on rapeseed plants, in collaboration with the Tao Chen Lab at Huazhong Agricultural University.

“This will hopefully provide a molecular genetic roadmap so we can target vulnerable points in crops’ genetic sequences and focus on repairing and strengthening them,” says Castroverde. “And on the non-genetic-engineering side, maybe we can start screening for agrochemicals that turn on CPG60g regardless of temperature. A dream would be that we can just spray plants when we know there is going to be a heatwave and the possibility of a disease outbreak.”

Castroverde’s ongoing research at Laurier is supported by the Natural Sciences and Engineering Research Council of Canada (NSERC), the Canada Foundation for Innovation, the Ontario Research Fund and the Ontario Ministry of Agriculture, Food and Rural Affairs. His initial research at Michigan State University was funded by an NSERC Postdoctoral Fellowship and the MSU Plant Resilience Institute.

This article has been adapted from the original work of Robin A. Smith. ­