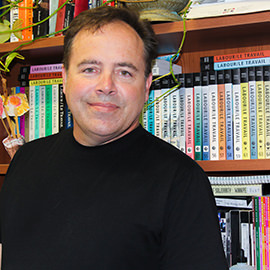 BRANTFORD – In the labour lore of Hamilton, Ontario, the summer of 1946 was an historic flashpoint. Across the city, some 12,000 workers hoisted picket signs – fighting for job security, better wages, equitable treatment and union recognition. Seventy years later, the stories behind the famous steel city strikes are brought to life in graphic novel-style format in the new book, Showdown! Making Modern Unions.

Robert Kristofferson, a professor in the Faculty of Liberal Arts at Wilfrid Laurier University’s Brantford campus, co-wrote Showdown! with illustrator and fellow academic Simon Orpana. Published by Between the Lines, the book will be officially launched at a reception event on Saturday, Sept. 17 at 7 p.m. at the Workers Arts & Heritage Centre in Hamilton. All are welcome to attend.

“The reader is an active participant in the story more so than with other forms of history,” said Kristofferson of the book’s format, which marries oral histories and archival information with cartoon-style illustrations. “Readers have to engage with the book and fill in for themselves what happens within and between the frames.”

The book represents the second stage of a two-stage Social Sciences and Humanities Research Council (SSHRC) Connections knowledge mobilization grant. Two years ago, Kristofferson completed the first stage of the project by developing content for WorkersCity, an app that offers walking tours of Hamilton’s labour history that includes over 100 sites. Informing both the book and the app are audio clips recorded in the 1990s of Hamiltonians who took part in the 1946 strikes.

In addition to its illustrative format, Showdown! also pays homage to graphic novel conventions by including a book within a book. Midway through, readers will find work by guest artist Matt McInnes, who recreates a photo album that belonged to Tom McClure, president of United Steel Workers Local 1005 in 1945. McClure’s snapshots of workers and their families provide a candid portrait of the people behind the labour movement.

“Essentially, the book is about how Hamilton workers translated their experience of work and attempts to organize into a new kind of unionism and a new society in the decades following World War II, a pattern that played out in similar ways in communities across Canada and the United States,” said Kristofferson. “The book serves to highlight the degree to which unions can bring dignity and respect to workplaces in the past and in the present.”

Coinciding with the book launch event at the Workers Arts & Heritage Centre will be Draw the Line, an art exhibition about the past and present stories of labour activism in Canada, from the historic Stelco strike of 1946 up to the 21st Century. Draw the Line Features the work of 15 activist comics and writers from across Canada and runs until December 17, 2016.