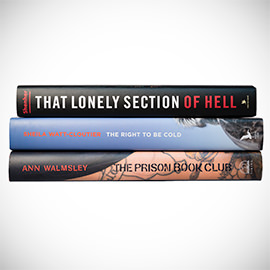 WATERLOO –Three books have been shortlisted for the 2016 Edna Staebler Award for Creative Non-Fiction. The $10,000 award, administered by Wilfrid Laurier University, recognizes Canadian writers for a first or second work of creative non-fiction that includes a Canadian locale and/or significance.

“Many of this year’s entries took on pressing social issues, so it’s no surprise that the shortlist features three books concerned with social justice,” said Bruce Gillespie, an award juror and professor in the Digital Media and Journalism program on Laurier’s Brantford campus. “From the mishandling of the police investigation into missing and murdered women in Vancouver’s downtown eastside, to the power of literature and fellowship to help rehabilitate prison inmates and the challenges faced by the Inuit and other Indigenous people as climate change affects their traditional lands and practices – these are three powerful books that are sure to engage and enlighten readers at the same time.”

The books on the 2016 shortlist, listed alphabetically by author surname, are:

That Lonely Section of Hell by Lorimer Shenher (Greystone)

In this searing personal account, ex-police detective Shenher describes his role in Vancouver’s infamous Missing Women Investigation and unflinchingly reveals his years-long struggle with Post-Traumatic Stress Disorder as a result of working on the case. In That Lonely Section of Hell, Shenher recounts the challenges that frustrated and ultimately delayed the investigation by years, including conflicts between city police and the RCMP, as well as systemic sexism and racism that failed to prioritize the cases of women who were sex workers and drug addicts, many of whom were also Indigenous. With a clear, moving voice, he also describes the personal toll of the case and its aftermath, and offers timely insights about how the justice system can and must do better by society’s most marginalized people.

Despite being traumatized by a mugging she experienced while living in London, England, journalist Ann Walmsley agreed to help a friend establish book clubs in two quite different Ontario men’s prisons. The Prison Book Club is a record of book club meeting discussions, presented in a straightforward and engaging manner that draws the reader into the conversations and lives of the book club members, and briefly, into Walmsley’s own journey to overcoming her initial fear of working with inmates. She concludes with short descriptions of the lives of a handful of book club members beyond their prison terms, leaving no doubt as to the profound impact prison book clubs can have on those who are given the opportunity to take part in them.

The Right to be Cold by Sheila Watt-Cloutier (Allen Lane)

Arctic-born Inuit writer Sheila Watt-Cloutier is best known for her environmental advocacy, and in particular for her linkage of the effects of climate change with human rights. The Right to Be Cold recounts not only her political experiences, but also demonstrates how the material and cultural aspects of living in the North ground her politics and inform her advocacy. Watt-Cloutier’s evocative descriptions of her childhood in what is now Nunavut, her experiences in residential schools and her family life clarify the complex ways in which the personal is connected with the political. Watt-Cloutier concludes that traditional Inuit hunting culture is “not a fondly remembered relic from the past...but a continuing contemporary way of life. And it’s perfectly compatible with the modern world.” This memorable account gives a vivid portrait of Inuit and arctic life, and makes clear how much will be lost as northern peoples lose the right to be cold.

The winner of the award will be announced later this month.

This year marks the 25th anniversary of the Edna Staebler Award for Creative Non-Fiction. In addition to the award presentation, a number of special events are planned to celebrate the anniversary on Nov. 3 and 4 at Laurier’s Waterloo and Brantford campuses. Details will be announced in the coming weeks.