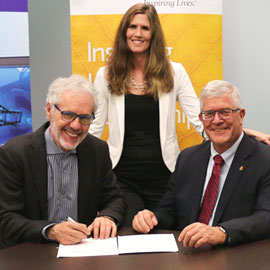 WATERLOO – The Vancouver Film School and Wilfrid Laurier University have struck an exciting new partnership that lets students from both institutions earn a Diploma in applied film skills and a Bachelor of Arts Honours degree in film studies in just four years.

The VFS-Laurier Pathway is open to graduates from one-year VFS programs such as Film Production, Writing for Film and Television, and Acting for Film and Television. Diploma graduates can proceed to the second year of Laurier’s Film Studies Honours program. In reciprocation, third-year students in the Laurier Film Studies program can attend VFS as part of an applied-media exchange year, and be eligible for the school’s Excellence in Media scholarship.

“The technical skills learned in film production—from videography and editing to sound design and post-production—are valuable for many professional fields today,” said Gates. “Laurier’s Film Studies Honours program foregrounds the theoretical, historical, and stylistic analysis of film while VFS’s programs provide the applied skills and hands-on experience to put that theory into practice. Together we will help make a student’s dream career, a reality.”

Griffin, who co-founded the VFS, said the partnership will address the needs of both students and industry. “The film and television industry is changing rapidly. So, too, must the education offerings in Canada,” Griffin said. “We are thrilled to jointly offer a pathway that will help students to meet an increasing demand of balancing hands-on experience with in-depth knowledge.”

The VFS-Laurier Pathway agreement, made between private and public institutions respectively, is among the first of its kind in Ontario. The agreement reflects the desire of both partners to provide students with innovative, relevant and high-quality learning opportunities.

Laurier’s Film Studies program is considered one of the top film studies programs in Canada. Films and visual media play a prominent role in our experience of the world today and the Film Studies Program at Laurier addresses that experience with an emphasis on international film history, film industries, the art of film, and individual films as texts. Our students benefit from our ongoing community engagement, including relationships with Kitchener-Waterloo’s Multicultural Cinema Club and the Grand River Film Festival.

About the Vancouver Film School