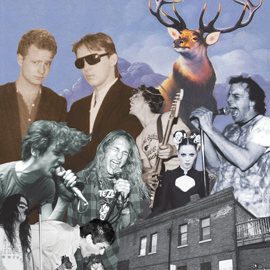 WATERLOO – Wilfrid Laurier University will welcome filmmaker and musician Wendy Schneider to its Waterloo and Brantford campuses for public screenings of her new film, The Smart Studios Story, on Sept. 23.

The film is a feature-length documentary tribute to an unassuming indie recording studio in Madison, Wisconsin, that became a legendary recording facility and driving force of alternative rock worldwide. The screening takes place at 1 p.m. in Brantford and 7 p.m. in Waterloo, and is free and open to the public. The Waterloo screening will be followed by a discussion with Schneider and Bob Egan, former member of Blue Rodeo and now community outreach manager of the Kitchener Public Library. Schneider will also participate in a series of classroom visits.

Schneider resides in Madison, Wisconsin, where she leverages the power of music, film, and the visual arts to address community issues. She is the creative force behind a range of projects including an audio documentary on the Civil Rights Movement, an award-winning CD compilation of songs protesting the Iraq War, audio soundscapes for children, the groundbreaking documentary, CUT: Teens and Self-Injury (Official Film Selection of the 2008 American Psychological Association conference), and most recently, The Smart Studios Story, which debuted at SXSW 2016. A long-time community activist, her work is dedicated to bringing creativity into contact with community issues, with local projects in Madison including Sparkle Dog, a company that uses audio-based literature as a learning tool in local elementary schools, and fundraisers for groups including Housing Initiatives, Rape Crisis Center, and the Young, Gifted & Black Coalition. Also a well-known figure in Madison’s rock music scene, Schneider has released two albums, Bugatti Type 35 and Traction.

The screening in Brantford takes place Sept. 23 at 1 p.m. in OD107 (Odeon Theatre, 50 Market St.). In Waterloo, the screening will be held Sept. 23, at 7 p.m. in BA201 (Bricker Academic Building). Light refreshments will be served in Waterloo.

For more information, or to schedule an interview with the filmmaker, contact Katherine Spring, associate professor of Film Studies at kspring@wlu.ca or 519-884-0710 ext. 4149.