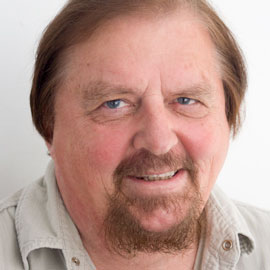 WATERLOO – Canadian journalist, author and historian Gwynne Dyer will speak to Wilfrid Laurier University students Sept. 26 at the Waterloo campus and Sept. 27 at the Brantford campus.

Dyer’s talk on the university’s Brantford campus, ”Don’t Panic,” will attempt to assess the real level of risk associated with terrorism in the Middle East. The talk is based on Dyer’s book, Don't Panic: Islamic State, Terrorism and the New Middle East.

“I’m delighted that Dr. Dyer will be coming again to talk to us at the Brantford campus,” said Heidi Northwood, dean of Laurier’s Faculty of Liberal Arts. “It’s a great opportunity for our students to engage with a historian-journalist of his caliber.”

Dyer’s talk on Laurier’s Waterloo campus, “Climate Wars,” will reveal his findings from a two-year tour of the climate-change world interviewing scientists, generals, diplomats and politicians.

“Gwynne Dyer has been providing a unique perspective on global events for more than 20 years and his numerous awards and honours demonstrate the impact of his work,” said Richard Nemesvari, dean of Laurier’s Faculty of Arts. “The Faculty of Arts at Laurier is very pleased to host his lecture ‘Climate Wars’ and to explore with Dr. Dyer this increasingly crucial issue.”

Originally trained as an historian, Dyer has worked as a freelance journalist, columnist, broadcaster and lecturer on international affairs for more than 20 years. Born in Newfoundland, he received degrees from Canadian, American and British universities, finishing with a PhD in Military and Middle Eastern History from the University of London. He served in three navies and held academic appointments at the Royal Military Academy Sandhurst and Oxford University before launching his twice-weekly column on international affairs, which is published by over 175 papers in 45 countries. His work in television has been nominated for an Academy Award and has won several Gemini awards.