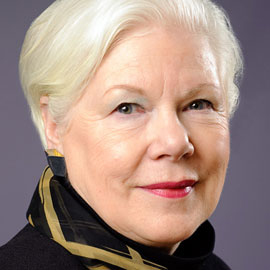 BRANTFORD – The Honourable Elizabeth Dowdeswell, Lieutenant Governor of Ontario, will visit Wilfrid Laurier University’s Brantford campus on Wednesday, Oct. 19 for the launch of a free public lecture series about First Nations residential schools and the work of the Truth and Reconciliation Commission. The Lieutenant Governor will speak at 7 p.m. in Room RCE 004 in the Research and Academic Centre at 150 Dalhousie St. She will be followed by Nathan Tidridge, a Waterdown teacher and noted expert on the Crown in Canada. Tidridge will speak about how treaties between the Crown and First Nations can become a basis for a renewed relationship.

The lecture series runs until next spring and is sponsored by the Friends and Neighbours Group, and presented in association with Wilfrid Laurier University. Friends and Neighbours is a grassroots committee of Brantford area residents supporting the Woodland Cultural Centre's Save the Evidence Campaign. The campaign is raising money for repairs and renovations of the former Mohawk Institute Residential School building at 184 Mohawk Street, one of the last remaining residential school buildings in the country.

On Wednesday, Nov. 16 at 7 p.m., the second lecture will feature the Honourable Bob Rae, former Ontario premier and interim federal Liberal Party leader from 2011-13. He currently works with First Nations as an advisor, negotiator and legal counsel. His lecture is entitled Healing Hearts and Treaties. It will be in the same location.

The speakers, dates and times for lectures in early 2017 will be announced when details are confirmed.

About 150,000 First Nations children were removed from their homes in the 19th and 20th centuries and sent to the mainly church-run residential schools, sometimes hundreds of miles from home. The children were forced to abandon their own languages and cultures in order to be assimilated into Canadian society. They lived in substandard conditions and endured physical, emotional and sexual abuse. When they ultimately returned home – sometimes after a decade or more – they were outsiders in their own communities.

"A lot of people don't know what happened right on our doorstep," said Dave Neumann, chair of Friends and Neighbours. "They need to know. This lecture series will help to educate people in our community."

"We need to have a serious, sustained dialog about reconciliation," he said. "Reconciliation will be difficult and complicated but we have to start coming together."

The Mohawk Institute was the country's first residential school and operated from 1828 to 1970. After it closed, it reopened in 1972 as the Woodland Cultural Centre. Recently, major roof leaks have caused significant and costly damage to the residential school building. So far, the Save The Evidence Campaign has received financial support from the Six Nations Elected Council, the City of Brantford and the Province of Ontario as well as other individuals and organizations.

For more information on the lecture series, contact Dave Neumann, chair of Friends and Neighbours at  denuma@rogers.com , 519-759-7885 or 226-388-0009. To learn more about the Save the Evidence Campaign, contact Jessica Powless, outreach co-ordinator, Woodland Culture Centre at  jpowless@woodland-centre.on.ca or 519-759-2650, ext. 257.