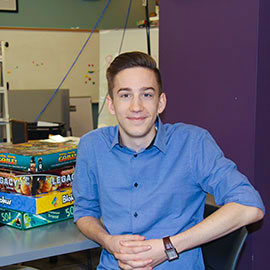 BRANTFORD – For 24 hours straight this weekend, Nov. 5-6, students at Wilfrid Laurier University’s Brantford campus will design games for a good cause, all while finding ways to foster empathy between roommates.

Members of the WLU Game Changers, a learning cluster of students who reside at the university’s Grand River Hall, will take part in Extra Life, an annual fundraiser in support of Children’s Miracle Network Hospitals. They have a goal of raising $1,000 for the charity, whose network of benefactors includes nearby McMaster Children’s Hospital, SickKids in Toronto, and the Children’s Hospital at London Health Sciences Centre.

Traditionally, the Extra Life fundraiser has encouraged individuals, families and community groups to gather together, raise pledges and play games for 24 hours straight. The WLU Game Changers added their own twist to the event: rather than playing games, the students will design games. During the 24-hour game jam, participants plan to create two games: one will be a narrative card-based game, and the other an escape room-style game. Both will focus on developing empathy and consideration between roommates in a post-secondary residence setting.

“The mantra of the Brantford Games Network is ‘changing the world through games and play,’ so this event is a perfect fit,” said Tyler Hall, a student in Laurier’s Game Design & Development program, and the residence staff member leading the initiative. “The Children’s Miracle Network Hospitals have a huge, positive impact on so many families, so we’re very proud to be supporting their work.”

Hall explained that the games created during Extra Life will have a tangible, real-world benefit.

“Moving away to university and living with a roommate for the first time is a big transition — and living with someone in close quarters has its challenges,” Hall said. “We decided that our games would focus on ways to foster empathy and consideration among post-secondary roommates. After the fundraising event we’ll playtest the designs with a goal of incorporating one or both of them in to residence life orientation for new students at Laurier.”

The Extra Life game jam will begin at 8 a.m. on Nov. 5 and end at 8 a.m. on Nov. 6. Students will be taking shifts and working on the two games during the entire 24-hour marathon. The event takes place in the BGNLab (Brantford Games Network Lab). Those interested in watching their progress can do so via a live stream.

More information about the event, including how to sponsor the WLU Game Changers, is available online.