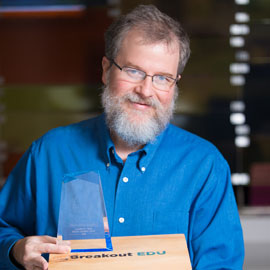 BRANTFORD – Wilfrid Laurier University Game Design and Development Professor Scott Nicholson recently won the Best Non-Digital Game award at the Meaningful Play 2016 conference in Lansing, Michigan for his escape room inspired learning game, Ballot Box Bumble. Nicholson’s game was one of 50 games that were selected from an international pool of applicants to compete at the conference.

“Winning this award helps raise awareness of Laurier’s Game Design and Development program nationally and internationally,” said Nicholson. “Most of the competitive gaming programs in North America were represented at this conference, so bringing an award home demonstrates that Laurier is here to be a player in this field. I hope that some of our students will apply to compete in the next Meaningful Play conference in 2018."

Ballot Box Bumble is designed to help teach high school-level civics to students. In the game, players are volunteers at a Canadian polling centre in the 2015 federal election. When things go wrong, the players explore different aspects of the Canadian electoral system as they try to resolve the problems before Elections Canada calls for the preliminary results. The game uses the Breakout EDU platform, which is an open-source platform designed to help teachers bring non-digital games based on escape room design concepts into the classroom.

Nicholson, one of the leading global scholars on escape rooms, also presented two papers at the conference, "The State of Escape: Escape Room Design and Facilities" and "Ask Why: Creating a Better Player Experience Through Environmental Storytelling and Consistency in Escape Room Design."

The Meaningful Play conference explores meaningful applications of games and issues in designing meaningful play. The conference was established in 2008 and runs biennially at Michigan State University.