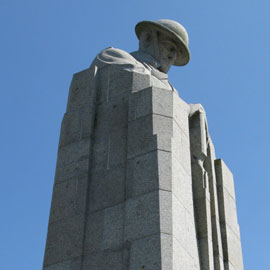 BRANTFORD – Wilfrid Laurier University’s Brantford students, along with Brantford community members, will head to Belgium and France May 16 for a two-week tour of battlefields, museums, monuments and cemeteries relating to Canada's involvement in World War I and II. The tour will be led by Laurier History Professor Peter Farrugia and instructor David Olivier.

Participants will visit Vimy Ridge, Ypres, the Historial de la Grande Guerre on the Somme, the Battle of Dieppe and D-Day beaches, and will discuss themes including the ethics of war, the interplay of history and memory, and the implications of battlefield tourism.

“Touring the battlefields of Belgium and France has been the single most impactful experience of my years of post secondary education,” said Carla Jean Stokes, a Laurier History student who joined the 2011 tour. “Nothing has been more instructive than physically experiencing the concepts I have studied. I walked through the trenches of the Somme and Vimy Ridge and saw the futility of scaling the cliffs at Dieppe. We trekked across Omaha beach and took in the beauty of the numerous commonwealth cemeteries.”

The Brantford Battlefield Tour will include a unique component dealing with the nature of the Aboriginal involvement in the conflicts. Participants will explore the conditions under which communities like Six Nations decided to fight, what Aboriginal people experienced and how the Great War is remembered in Aboriginal communities.

This is the first year a battlefield tour is available to both Laurier Brantford students and community members. Laurier’s Brantford campus will continue to run tours every other year.

“This is a wonderful chance to experience many important sites for Canadian soldiers during the World Wars,” said Farrugia. “With both students and Brantford community members taking part, there’s an opportunity for inter-generational learning and building bridges between Laurier Brantford and the wider community.”

Battlefield tours run annually through the Laurier Centre for Military Strategic and Disarmament Studies (LCMSDS). The tours are open to Laurier students at both Waterloo and Brantford campuses.