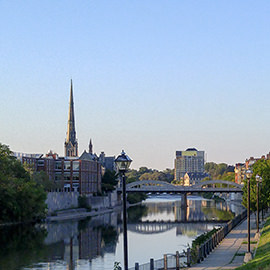 WATERLOO – As part of a course competition for Wilfrid Laurier University’s Capstone Urban Studies Project (CUSP), a team of Geography and Environmental Studies students was awarded first prize for recommending a smartphone heritage map application for the City of Cambridge, which would include an interactive feature articulating the stories of historical Cambridge residents buried in local public cemeteries.

The team proposed creating an interactive smartphone application to explore the profiles of historic Cambridge residents, while linking the historic figures to specific locations throughout Cambridge. The city’s history would be brought to life through pictures and physical sites, and through audio recounting information about each individual. A panel of City of Cambridge staff selected the winning project and awarded the team $2,000 from private donations.

“The presentations made by all the students were excellent and professional,” said Corina Burnell, manager of Cemeteries, City of Cambridge. “We were excited by the students’ creativity and their quality of work as potential consultants.”

The proposed smartphone application would allow users to conduct self-guided walking tours while learning about the City of Cambridge’s history. The application could be used by students, educators, historians, clubs, families and tourists. The team’s goal is to make the application available to as many people as possible. The project beat out four other student teams to claim top prize. Other projects included walking tours, geotours, and other educational and community-engagement projects that focused on the people and places that make Cambridge unique.

We are telling the stories of people from different walks of life; politicians, educators, musicians, athletes, and religious leaders,” said Hupman. “Cambridge has a rich, diverse history and CHR Associates aims to promote this information by making it accessible and by allowing people to envision what life was like for these people as Cambridge developed.”

“The Capstone Urban Sustainability Project at Laurier is a unique partnership between Laurier and the City of Cambridge that immerses students in a real-world consulting environment to perform projects on a variety of sustainability initiatives throughout Cambridge,” said Andrew Spring, a PhD candidate at Laurier who was the course instructor. “We had a variety of very creative and high quality projects we were able to present to the City.

The CUSP program emerged from an increased desire to develop post-secondary programming that helps students deepen their engagement with the community. Thanks to the generosity of the City of Cambridge, Paul Puopolo (BA’73) and Louise Puopolo of Polocorp Inc., Christopher Coupal (BA ’95) of Coupal Markou Commercial Real Estate Inc., Stephen Rhodes (BA ’88) and Wanita Rhodes (BA ’87) and Laurier’s Department of Geography and Environmental Studies, the program is able to give students the opportunity to use their skills as Geography and Environmental Studies majors and to gain comprehensive knowledge about the consulting process.

“This work sets the foundations for a workable heritage map,” said George Barnes, director of Community Services Operations, City of Cambridge. The City of Cambridge is excited to continue this partnership with Laurier and the Capstone Urban Studies Project team as we work towards our heritage and sustainability initiatives.”

This is the second year that Laurier’s Department of Geography and Environmental Studies has partnered with the City of Cambridge for the CUSP project.