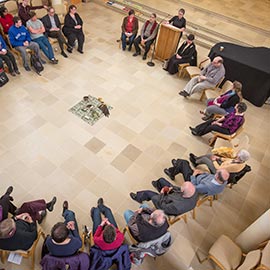 The story of Christianity’s encounter with Indigenous spiritualities and worldviews in North America, and beyond, is a tragic tale, says Allen Jorgenson, professor of Systematic Theology at the seminary and one of the event co-ordinators.

“It’s a story of the rejection of other religious traditions and of the refusal to see the many ways in which those traditions support human flourishing and honour the Creator,” said Jorgenson. “Through this conversation between Indigenous leaders from different faith traditions, we can support the call to dialogue recommendation of the Truth and Reconciliation Commission of Canada and further the important work of reconciliation in our own context.”

During this instalment of the Circle of Dialogue, which is held at the seminary twice each year, speakers will include Rick Monture, assistant professor of English and Cultural Studies at McMaster University and Rev. Norm Casey, priest at the Anglican Parish of the Six Nations.

“The Laurier community is fortunate to have the opportunity to learn more about the belief system of our Haudenosaunee neighbours from a scholar, educator and community worker in conversation with an Anglican Church of Canada priest,” said Jean Becker, senior advisor: Aboriginal Initiatives.

The event is free and open to the public. No registration required. For event details contact Dorinda Kruger Allen, the seminary’s events co-ordinator, at dkrugerallen@wlu.ca or 519.884.0710 x3241.