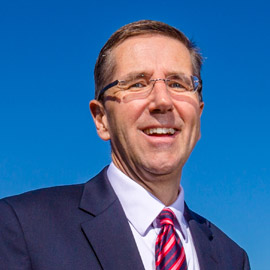 WATERLOO – Faith and politics, two subjects that are often kept as far apart as possible. And when the two do overlap, it tends to make people uncomfortable. But what is it about the intersection of faith and politics that causes so much unease?

“There is a cultural discomfort with faith being involved in politics and a fear that people will impose their views on others,” said Milloy. “However, I think faith has a role in public life and public discourse. It shouldn’t be the dominant voice. I certainly don’t think anyone should say, ‘I’m religious, God told me this, so you have to do it,’ but it’s a valuable voice to have at the table.”

Milloy’s talk will examine the discomfort many feel when faith and politics intersects, discussing why people might take the opinion that religion and politics should be kept separate. Milloy will also explore how faith can be valuable in the political sphere and help guide policy-makers without becoming a divisive force.

“Some of what we see in the United States, the ‘God’s on our side’ kind of thinking, is of no help to public debate or public policy,” said Milloy. “But a faith-based perspective is one based on a lack of self-interest and I think that’s a perspective worth listening to.”

The event will also serve as the local launch of a recently published collection of essays, Faith and Politics Matters, of which Milloy served as editor. A reception to celebrate the book’s launch will follow the lecture.

Milloy joined Laurier in July 2015 as the inaugural practitioner-in-residence in applied political science. He is also an assistant professor of public ethics and co-director of the Centre for Public Ethics at Waterloo Lutheran Seminary. Milloy is a former Ontario cabinet minister and member of provincial parliament for Kitchener Centre.

He also served as legislative assistant to former Prime Minister Jean Chrétien as well as serving as an assistant to a number of senior federal cabinet ministers, including Stéphane Dion and John Manley. Before running for elected office, Milloy worked as the director of public affairs for the Centre for International Governance Innovation (CIGI).