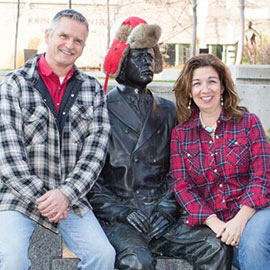 WATERLOO – Instructors Leslie Fagan and Lorin Shalanko from Wilfrid Laurier University’s Faculty of Music will launch their Canadian Art Song CD, Thread of Winter, at an event on April 5 as part of the Faculty of Music’s 40th anniversary celebrations. The event is free, and takes place at 7 p.m. in the Maureen Forrester Recital Hall located on Laurier’s Waterloo campus.

“Canadian music has been neglected,” said Shalanko, coach, accompanist and instructor in Laurier’s Faculty of Music. “Many times over the course of a school year my students, eager to learn pieces of Canadian repertoire, have come to me unable to find recordings to listen to.”

The Canadian Art Song repertoire was chosen for its accessibility to young singers.

Shalanko feels the music on the CD is beautiful, accessible and appropriate for students. With the release of the CD, the team is hopeful the Canadian Song book can be used as a reference tool for teachers and students.

“There are so many Canadian gems waiting to be discovered and brought to life,” said Fagan, voice instructor in Laurier’s Faculty of Music. “It’s important that Canada has its own treasure trove of home-grown art song, and I applaud Laurier for making Canadian repertoire a yearly requirement for its voice majors.”

The repertoire on volume one includes:

Laurier’s Faculty of Music is celebrating its 40th anniversary and its growth from 69 students in one program to over 400 students across seven degree and diploma programs at the undergraduate and graduate levels.

Laurier also operates the Laurier Conservatory, is home to the National Youth Orchestra of Canada and was named Canada’s Best Music campus by CBC Radio.