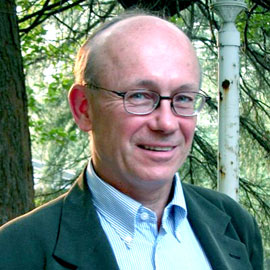 WATERLOO – Peter Howitt, one of the most prominent economists in the world and the Lyn Crost Professor of Social Sciences at Brown University, will present a public talk entitled Innovation and Growth through Creative Destruction on Wednesday, June 15 from 4:30 p.m. to 5:30 p.m. at the Balsillie School of International Affairs in Waterloo.

Howitt is one of Canada’s most eminent social scientists. He is a fellow of the Royal Society of Canada and past president of the Canadian Economic Association. Howitt will receive an Honorary Degree from Wilfrid Laurier University on June 16 during spring convocation.

Howitt is a co-founder of the modern innovation-based theory of economic growth, which focuses on creative destruction: the process of industrial change in which technological and scientific innovation replaces old know-how with new knowledge. In 2014, Thompson-Reuters selected him as the leading candidate for the Nobel Prize in Economic Sciences, reflecting the importance of his work.

“Over his 40-year academic career, Peter Howitt has made numerous important contributions to economics, in particular to the development of modern growth theory,” said Jurek Konieczny, professor of Economics at the Lazaridis School of Business & Economics. “Howitt’s theory focuses on the role of innovation, and incentives to innovate, in the process of economic growth. This is of particular importance to the Waterloo Region, which thrives on innovation. We are very pleased to have Peter Howitt speaking here.”

The public is welcome to attend Howitt’s talk, which will be held Wednesday, June 15 from 4:30 to 5:30 p.m. in Room 142 of the Balsillie School of International Affairs. Refreshments will be served.