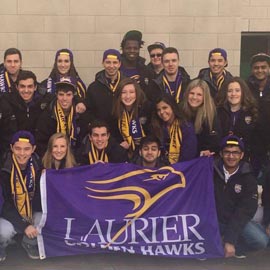 WATERLOO – Laurier’s Lazaridis School of Business & Economics has once again come out on top at JDC Central competition, winning the highest distinction — School of the Year — for an unprecedented seventh year in a row.

Hosted Jan. 8-10 by the Canadian Association of Business Students (CABS), over 700 undergraduate business students from 14 universities competed in parliamentary-style debates, academic cases in eight subject areas, charity events, sports tournaments and social activities. Students spend countless hours over many months preparing, putting what they learn in the classroom into practice and making valuable connections to benefit their futures.

“Our goal from the beginning of this journey was to win School of the Year,” said Blair, a fifth-year student in the joint BBA(Laurier)/BMath(UW) program. “We knew that it would be a difficult road filled with ups and downs and this weekend was no different. Each and every team put forward their best performances and was fully committed to the process. As much of a reward as winning School of the Year again is, what will stay with me forever is the growth each team showed over the term and the friendships and bonds we built as a team.”

“None of this would be possible if it were not for the efforts by CABS and the Organizing Committee as they ran an incredible event for all delegates,” said Shkimba, a fourth-year BBA student. “Every captain had an extraordinarily hard working delegation this year and it was a pleasure working with all of them.”

In the seven years since JDC Central began, the Lazaridis School has remained undefeated.

Summary of results for the Lazaridis School at JDC Central 2016: