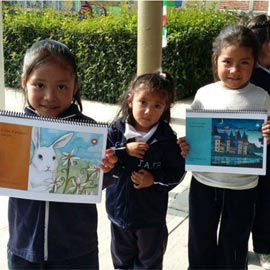 WATERLOO – When first-year Spanish 100 students at Wilfrid Laurier University were told they would be creating an illustrated children’s book by the end of the year in Spanish – a language they were just starting to learn – they were intimidated by the prospect. However, the project had a surprising twist; their 25 books would be donated to an underprivileged preschool in Mexico for children to read and enjoy.

María Eugenia de Luna, assistant professor in Laurier’s Languages and Literatures program and instructor of the course, knew that once her students realized the importance of these books for the children from the Jardín de Niños José Ángeles, they would be excited by the project.

“The students were so committed to this project,” said de Luna. “They kept sending me drafts and editing previous versions until they were perfect.”

The 49 first-year students teamed up in pairs and used a digital literacy tool to select images and format their stories into a book. The project was challenging – the story had to be fit for children aged one to four and had to correlate with the images available in the program.

“When we were first given the assignment, I realized how difficult it might be to put together a book with pictures that children in Mexico would relate to,” said Sarah Dibblee, now a second-year student in Laurier’s Business Administration program. “After brainstorming an idea for the book, we assembled a virtual storyboard where we saw all our ideas come together. It was hard to write the story in Spanish, but the final project turned out to be amazing.”

In November last year the preschool students lined up to receive the books and thank the Laurier students for writing stories just for them. The 25 books made a sizable addition to the limited library at the school.

“The preschool, all the children, teachers, parents and the parent’s board, all appreciate these books,” said Laura Sánchez Enriquez, president of the school’s Parent’s Board. “They are beautiful and will be very useful for these children. Thank you very much because these books will make our children happy when they read them.”

“I did not fully appreciate the impact we had until Professor de Luna showed us the video of the children receiving the books earlier this year and how excited all the kids were,” said Tyler Raytek, now a second-year student in Laurier’s Business Administration program. “Books are very important to developing a child's creativity and imagination, so to be able to improve my own abilities in the Spanish language and give these children something so important was an amazing experience.”

Creating engaging projects, such as a storybook, gives students learning a new language an extra boost to overcome steep learning curves, says de Luna. It also makes students realize how they can make a big impact through their education.