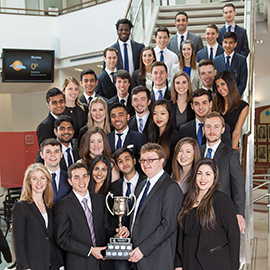 WATERLOO – Laurier’s Lazaridis School of Business & Economics has a lot to celebrate after a record-number of business case competition wins in January.

The JDC Central finance team — made up of fourth-year business students Krishna Aggarwal, Ryan Fleming and Justin Keller-Hobson — also challenged students from 17 other schools in the Battle on Bay Street, hosted by Ryerson University, and came in third.

The 2016 DECA U Provincials was a medal haul for the 121 members of the Lazaridis School team, with honours including the Largest Chapter Award, second place in Quiz Bowl and the Highest Medal Count – 29 medals – among the 22 other universities in attendance.

January’s victories weren’t limited to the undergraduate level. Representatives from the Lazaridis School’s MBA program competed in the Inter-University Case Conference (IUCC), winning first place for their solution to a business case about the Kitchener Rangers.