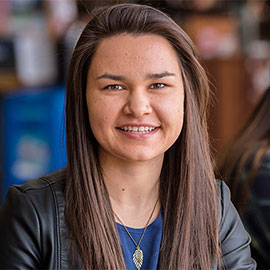 WATERLOO – Wilfrid Laurier University is proud to join the Council of Ontario Universities (COU) in a campaign to support Aboriginal learners and encourage Aboriginal youth to pursue education at the university level.

The “Let’s Take Our Future Further campaign,” which was unveiled this week by the COU on behalf of the province’s publicly funded universities, aims to celebrate the achievements of Aboriginal learners currently studying at Ontario universities, along with Aboriginal university graduates, who make a daily difference in their communities.

As part of the Let’s Take Our Future Further campaign, COU has launched futurefurther.ca, featuring compelling profiles and videos from 13 role models who are studying at, or have recently graduated from, an Ontario university.

Two Laurier students are featured in the video profiles.

Elizabeth McLeod (pictured above), who overcame the challenges of leaving a small community in Northern Ontario to study at Laurier, completed an undergraduate degree in Kinesiology and is currently working on a Master of Science degree. “While I was once nervous about living away from home, I now enjoy living in Waterloo where I have created a sense of community and way of life for myself,” she says. “The Aboriginal Student Centre on my campus is definitely my second home — I have established life-long friendships, and its welcoming environment has had a significantly positive influence on my quality of life.”

Darren Thomas has worked hard to remain engaged with his traditional Aboriginal community while completing a PhD in community psychology at Laurier. “Balancing between these two worlds is difficult,” he says. “But I have found opportunities to bring Indigenous knowledge into the classroom, and what has been so rewarding for me is that non-Aboriginal students and faculty have welcomed this knowledge. It makes me feel as though I have a place, and I belong here.”

Laurier is committed to building capacity in Aboriginal education and has established an advanced model for Aboriginal student support. This includes an Aboriginal Education Council, a senior advisor for Aboriginal initiatives, student-support staff, Aboriginal Student Centres on both the Waterloo and Brantford campuses, and program-based elders. Laurier also offers Indigenous academic programming, including a Master of Social Work Aboriginal Field of Study, and a Bachelor of Arts in Indigenous Studies. Laurier’s commitment to supporting Aboriginal learners is established in the university’s new Strategic Academic Plan and in its Strategic Mandate Agreement with the Ontario government.

“We tend to focus on the disparity in educational attainment for Aboriginal people and forget that we have made significant strides over the past four decades,” said Jean Becker, Laurier’s senior advisor for Aboriginal initiatives. “With 6,500 postsecondary Aboriginal students currently in Ontario universities, and many thousands more alumni, we all have role models and success stories to share."

As part of the COU’s Let’s Take Our Future Further campaign, resource kits for Aboriginal learners transitioning into or considering attending an Ontario university will be distributed widely.

Next week, an online video contest will launch on Twitter and Facebook asking Aboriginal learners currently enrolled in university to tell their story about how university education has taken their future further, and has also enriched the future of their communities.

The COU campaign comes just months after a report by the Truth and Reconciliation Commission which put a spotlight on the need to ensure equitable access to postsecondary education for Aboriginal students.

November also marks the anniversary of the Report of the Royal Commission on Aboriginal Peoples which highlighted the many benefits of education and the huge costs to individuals and communities if these opportunities are missed.

The same Statistics Canada survey indicates that Aboriginal youth between 15 and 24 represent 18 per cent of the total Aboriginal population in Canada, with a further 28 per cent being children aged 14 and under. This means that a significant number of Aboriginal youth will be contributing to Canada’s economic and social prosperity by 2026. The Let’s Take Our Future Further campaign supports efforts at Laurier and other Ontario universities to engage more Aboriginal learners in the postsecondary programs critical to those future contributions.