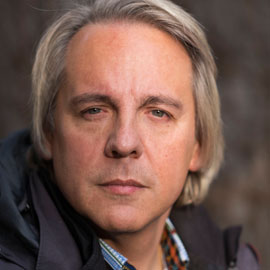 BRANTFORD – Fiction writer and playwright Drew Hayden Taylor will spend the week of Feb. 22-26 at Wilfrid Laurier University’s Brantford campus. Taylor has been chosen as the university’s latest Edna Staebler Laurier Writer-in-Residence (WIR), a term that runs from January to April 2016. Taylor is the award-winning author of 27 books, including adult and young-adult (YA) fiction as well as plays and essays. Taylor will be the fourth writer to hold the Edna Staebler Laurier WIR position.

A welcome event and community talk will take place on Tuesday, Feb. 23 from 4 p.m. to 5:30 p.m. in room 110 of the Odeon Building. At the free event, which is open to all, Taylor will speak on the topic of “Whitewater Rafting Down the River of Aboriginal Humour.”

“During his time in Brantford Drew will be holding office hours to meet with students,” explains Professor Michael Ackerman of Laurier’s English department. “He will also facilitate a creative writing workshop for aspiring writers from Laurier and Six Nations Polytechnic. It’s a great opportunity for students of any discipline to bring in writing samples and to talk – one on one – with a respected, award-winning Canadian author about their work.”

Taylor, who hails from Curve Lake First Nation in Central Ontario, has served as writer-in-residence at the University of Michigan and the University of Western Ontario, as well as Playwright in Residence at Native Earth Performing Arts, Cahoots Theatre, Ryerson University, and the University of Lunenberg in Germany. Taylor has also worked as the writer and director for documentary films and has written for television, principally for APTN’s Mixed Blessings. He has been twice nominated for a Governor General’s Award (once for fiction and once for drama), and has won a Chalmers Award for Toronto at Dreamer’s Rock in 1992, a Dora Mavor Moore Award for Only Drunks and Children Tell the Truth in 1996, an Independent Publisher Book Award for his YA fiction The Night Wanderer in 2008, as well as the Ontario Premier’s Award for Creative Arts and Design in 2010 and the Queen Elizabeth Diamond Jubilee Award in 2012. Taylor was chosen from a group of 20 applicants for the residency.

The Edna Staebler Laurier WIR is a full-time position that requires 40 per cent of the author’s time to be spent on community programs or projects, leaving 60 per cent of the work-week available for the writer’s own creative projects. Community programs and projects include reading manuscripts and consulting with students and the public, visiting classrooms, giving readings and lectures, leading workshops, or participating in similar community programming at Laurier’s Waterloo, Brantford and Kitchener locations.

A separate bequest from Staebler sponsors the Edna Staebler Award for Creative Non-Fiction, awarded each year to a writer’s first or second book of creative non-fiction, and the most lucrative literary prize administered by a Canadian university.