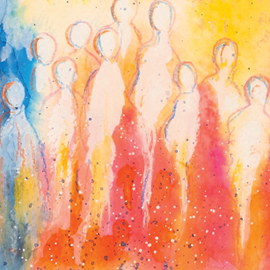 The festival, which consists of an academic symposium and an evening of music and word, takes place over two days (Oct. 3-4) in two locations. All events are free and open to the public.

This is the first year that the public portion of the festival runs over two days. The academic symposium is a new addition to the event. On Saturday, Oct. 3, 2-5 p.m., the Sing Fires of Justice Symposium: What Now? takes place at the seminary. Rev. Michael Blair, executive minister, communities in mission with the United Church of Canada, is slated to deliver the keynote address. His talk will be followed by a roundtable discussion. Panellists include Laura Mae Lindo, director of the Diversity and Equity Office at Laurier; Jean Becker, senior advisor with the Office of Aboriginal Initiatives at Laurier; Selda Sezen, a doctoral student in Human Relationships at the seminary; and Dawud Wharnsby, a local musician and peace activist. A reception will follow.

“How do we make sense of individual life experiences, personal paths and social justice aims?” asks Carol Duncan, a professor in Laurier’s Department of Religion and Culture, and moderator for the academic symposium. “An interactive roundtable panel of speakers will explore these connections with insight from a variety of perspectives.”

"Collaborating on Sing Fires of Justice has been an experience in forming community through making music together,” says Lee Willingham, director of the Laurier Centre for Music in the Community.

Debbie Lou Ludolph, director of the Kanata Centre for Worship and Global Song, at Waterloo Lutheran Seminary, says diverse groups have long gathered for the sake of common humanity to make a community that addresses injustice.

“Song has provided the meeting place for this diversity, and faith freely expressed has allowed for an event that appreciates differences,” says Ludolph. “This year we will look back at the issues addressed over the past years, and remember for the sake of moving forward with action.”

Ludolph, Willingham, Wharnsby, Mark Vuorinen, Gerard Yun, and Kelly Laurila will provide musical and liturgical leadership. During Sunday’s event John Milloy, former Ontario cabinet minister and member of provincial parliament for Kitchener Centre, will speak in his new role as assistant professor of public ethics at the seminary and practitioner-in-residence in the Department of Political Science at Laurier. A freewill offering will be taken to benefit the building of a just community.