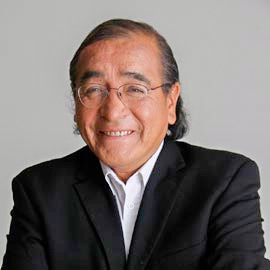 The event, titled “A morning with Tomson Highway: The place of Aboriginal literature and writing within the context of Canadian literature,” will begin a new tradition of programming events focused on Laurier’s Aboriginal alumni and community during Homecoming weekend. The event is led by the Office of Aboriginal Initiatives, in partnership with the Laurier Library, Department of English and Film Studies, Development and Alumni Relations office and WLU Press.

“As the Aboriginal Student Centres in Waterloo and Brantford are headed into their fifth year of operation, we will now look for more opportunities to respectfully engage Aboriginal alumni and other interested parties with exciting, campus-wide events,” said Jean Becker, senior advisor: Aboriginal Initiatives. “We look forward to re-connecting with alumni we know and meeting others for the first time.”

Highway is a novelist, playwright and musician, and a Cree of the Barren Lands First Nation in Nunavut. Highway studied music and English literature at the University of Manitoba and the University of Western Ontario, earning both his Bachelor of Music Honours and Bachelor of Arts. He worked in the field of Aboriginal social work for seven years, but left to pursue the arts. He achieved national and international recognition in 1986 with his sixth play, the multi-award-winning The Rez Sisters. Since then, he has written award-winning plays, held the position of artistic director of Native Earth Performing Arts, and published a bestselling novel, Kiss of the Fur Queen, as well as three children’s books.

Among the many awards he has received are the Dora Mavor Moore Award for Best New Play and Best Production, the Floyd S. Chalmers Canadian Play Award, the Toronto Arts Award, the Wang Harbourfront International Festival of Authors Award, the Silver Ticket Award, the National Aboriginal Achievement Award (2001), the Order of Canada (1994), and many others. He is the recipient of 10 honorary doctorates and has held writer-in-residence positions at several Canadian universities.

The Sept. 25 event is free and open to the general public beginning at 10 a.m. and will be held in the Hawknest, located in Laurier’s Turret Nightclub.

Register for the event.