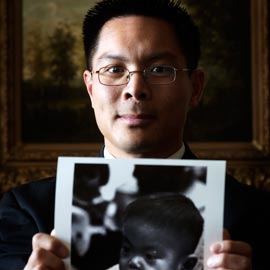 BRANTFORD – In 1975, Operation Babylift led a massive airlift of 2,500 war orphans out of South Vietnam to Canada during the Vietnam War.

Thanh Campbell, one of the orphans, will speak at Wilfrid Laurier University’s Brantford campus Nov. 6 about his life as a child refugee, international adoption and his reunion with fellow war orphans and his Vietnamese birth family.

“Mr. Campbell’s story is a powerful testimony of the vulnerability and resilience of children affected by war,” said Tarah Brookfield, associate professor in Laurier’s History and Youth and Children’s Studies programs. “It also highlights Canada’s long history in assisting children affected by war – a timely issue given the current refugee and migrant crises affecting youth and their families around the world.”

Campbell’s talk, titled “Orphan 32: Child Refugees, Displaced Families, and International Adoption,” will delve into his story about the value of family, life and the power of love. Campbell was born in Vietnam and came to Canada as part of the last flight out of Saigon in 1975 with 56 other orphan children.

Campbell was adopted into the family of Rev. William and Maureen Campbell, becoming the youngest of the couple’s six children. Campbell has since reunited with many of the children that flew over with him in 1975 as war orphans. The 57 Orphans’ story has been captured on CBC News, TVO, Canada AM, 100 Huntley Street and has also been covered by the Toronto Star, Hamilton Spectator, Ottawa Citizen, Vancouver Sun, and Saigon Newspaper. Most recently, Campbell wrote and published his autobiography titled, Orphan 32.

The talk will take place during Youth and Children’s studies class YC200 on Friday, Nov. 6 and is open to the public. It will begin at 1 p.m. in the Research and Academic Centre, room RCW 202, on Laurier’s Brantford campus.

Campbell is available for media interviews.