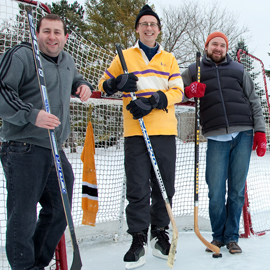 WATERLOO – In future winters Canadians will have fewer opportunities to skate outdoors, according to a new study by Wilfrid Laurier University researchers.

The number of days cold enough for outdoor skating in a typical Canadian winter could decrease by 34 per cent in Montreal and Toronto and by 20 per cent in Calgary over the course of this century, according to a newly published study in The Canadian Geographer. Laurier Geography and Environmental Studies researchers Colin Robertson, Robert McLeman, and Haydn Lawrence reached their findings using data volunteered by hundreds of Canadians who maintain outdoor rinks in their backyards and neighbourhood parks.

The researchers combined observations of daily skating conditions with climate-warming scenarios used by the Intergovernmental Panel on Climate Change (IPCC) for years 2020 to 2090, and found a noticeable decline in the number of days when it is possible to skate.

“The opportunity to build an outdoor rink won’t disappear entirely, but, especially in central Canada, the length of the skating season will shorten to the point where some winters it may not be worth the trouble of building a rink,” said Robertson, lead author of the study.

The data for the study was obtained through RinkWatch, a citizen-science project that invites people from across North America who maintain outdoor skating rinks to identify the location of their rinks on an interactive website map, then report the daily “skateability” of their rinks throughout the winter. Approximately 11,000 skating condition observations were entered from 961 rinks across Canada and the United States for the two winters of data used for the study (2012-13 and 2013-14).

The researchers compared skating conditions at rinks in 10 Canadian cities with temperature data from the nearest weather stations to calculate the relationship between local temperatures and the suitability of outdoor ice for skating. These calculations were in turn used to forecast the number of skating days under simulations of future daily average temperatures under the IPCC’s ‘A2’ greenhouse gas emissions scenario.

The researchers found that the number of outdoor skating days in the future would vary considerably from one year to the next, and from one region of Canada to another, with the impacts being most noticeable in southern Ontario and southern Quebec. They also found that when average daily temperatures warm even slightly above –5 °C, the likelihood of outdoor skating is reduced, even though temperatures remain below freezing.

“We risk having winters where it’s cold outside, but not cold enough to skate,” said McLeman, co-author of the report. “In the greater scheme of things, the disappearance of skating rinks from Canadians’ backyards is minor compared to the risks climate change poses to people living in water-scarce regions or low-lying coastal areas. It’s more a quality-of-life thing. The reality is, climate change is going to affect all of us, and this is just one way Canadians are going to notice it, right in their own backyards.”

Robert McLeman is available to speak with French-language media.