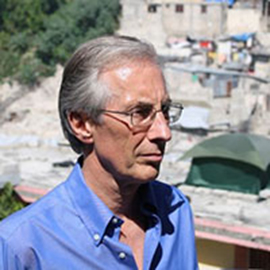 WATERLOO – The Academic Council on the United Nations System (ACUNS), along with Wilfrid Laurier University and the Balsillie School of International Affairs, will host a public lecture March 25 on Syria and its neighbours: Current developments, the politics of humanitarianism – and who is the terrorist?

The lecture features Nigel Fisher, who recently served as the regional coordinator of the United Nations’ humanitarian relief efforts for the crisis in Syria. Fisher will discuss what is happening today in Syria and how the global humanitarian relief framework is functioning in the face of such massive challenges.

“Nigel Fisher brings us a vast wealth of hands-on experience in leading and supporting large-scale humanitarian relief operations for the United Nations, in some of the most difficult environments – Syria being the most recent,” said Alistair Edgar, executive director, ACUNS. “I am very pleased that we have this opportunity to engage with Nigel, to hear more about the realities of his work, including the many difficult challenges, practical problems and the achievements of the United Nations and the international community in addressing these situations and attempting to bring vital assistance to suffering and at-risk populations.”

In his role as regional UN humanitarian coordinator for the Syria crisis, Fisher negotiated and organized the first major UN humanitarian relief convoy in three years to be allowed to bring critical aid supplies – medical, hygiene, food, blankets, and family kits provided by the World Food Programme, UN High Commissioner for Refugees, UNICEF, World Health Organization and International Organization for Migration – to the population suffering from the ongoing war in Syria.

Fisher has worked for over three decades with the United Nations in 15 countries. He worked with UNICEF for over two decades in Asia, Africa and the Middle East, where he specialized in the protection of children affected by armed conflict. He served as assistant secretary-general with the UN Department of Peacekeeping, where he was responsible for humanitarian recovery operations in Afghanistan after the fall of the Taliban and in Haiti following the 2010 earthquake. Fisher is the former executive director of the United Nations Office for Project Services and former president and CEO of UNICEF Canada.

Fisher served as UNICEF’s special representative for Rwanda in the immediate aftermath of the Rwandan genocide in 1994. He led UNICEF’s response to the first Gulf War in the Middle East and UNICEF’s cross-border operations for Afghanistan after 9/11.

He has spent much of his career on developing and applying standards for the protection of child soldiers and conflict-affected children, as well as on civil-military relations. He has published on issues of trauma recovery, children in armed conflict and basic education. He is an adjunct professor at the University of Victoria, a member of the board of the Children and War Foundation and in 2013, received the Canadian Medical Association’s Medal of Honour for his lifelong commitment to child health.

ACUNS is a global professional association of educational and research institutions, individual scholars, and practitioners active in the work and study of the United Nations, multilateral relations, global governance, and international cooperation. We promote teaching on these topics, as well as dialogue and mutual understanding across and between academics, practitioners, civil society and students.

The Balsillie School of International Affairs (BSIA) is an institute for advanced research, education, and outreach in the fields of global governance and international public policy. Founded in 2007 by philanthropist Jim Balsillie, BSIA is an equal collaboration among the Centre for International Governance Innovation, the University of Waterloo, and Wilfrid Laurier University.

The lecture takes place at the Balsillie school of International Affairs, room 142 from 5:30 p.m. to 7 p.m. The event is free and open to the public.